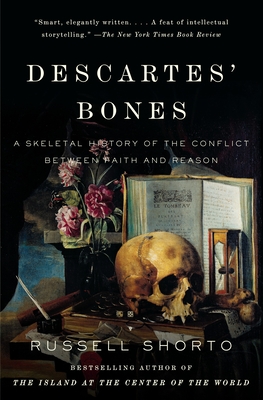 A Skeletal History of the Conflict Between Faith and Reason

“Descartes' Bones is wonderful -- a balanced presentation of Science, God, and everything in between.”
— Kelly Curran, joseph-beth Booksellers, Pittsburgh, PA
View the List

Sixteen years after René Descartes' death in Stockholm in 1650, a pious French ambassador exhumed the remains of the controversial philosopher to transport them back to Paris. Thus began a 350-year saga that saw Descartes' bones traverse a continent, passing between kings, philosophers, poets, and painters.

But as Russell Shorto shows in this deeply engaging book, Descartes' bones also played a role in some of the most momentous episodes in history, which are also part of the philosopher's metaphorical remains: the birth of science, the rise of democracy, and the earliest debates between reason and faith. Descartes' Bones is a flesh-and-blood story about the battle between religion and rationalism that rages to this day.


Praise For Descartes' Bones: A Skeletal History of the Conflict Between Faith and Reason…