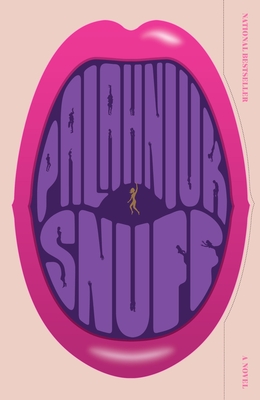 In the crowded greenroom of a porn-movie production, hundreds of men mill around in their boxers, awaiting their turn with the legendary Cassie Wright. An aging adult film star, Cassie Wright intends to cap her career by breaking the world record for serial fornication by having sex with 600 men on camera—one of whom may want to kill her. Told from the perspectives of Mr. 72, Mr. 137, Mr. 600, and Sheila, the talent wrangler who must keep it all under control, Snuff is a dark, wild, and lethally funny novel that brings the presence of pornography in contemporary life into the realm of literary fiction.

Chuck Palahniuk’s eight previous novels are the bestselling Rant, Haunted, Lullaby, Diary, Choke—which was made into a 2008 film by director Clark Gregg, starring Sam Rockwell and Anjelica Huston—Survivor, Invisible Monsters, and Fight Club, which was made into a film by director David Fincher. He is also the author of the nonfiction profile of Portland, Oregon, Fugitives and Refugees, published as part of the Crown Journeys series, and the nonfiction collection Stranger Than Fiction. He lives in the Pacific Northwest.www.chuckpalahniuk.net