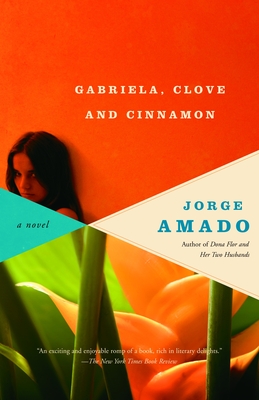 Ilhéus in 1925 is a booming town with a record cacao crop and aspirations for progress, but the traditional ways prevail. When Colonel Mendonça discovers his wife in bed with a lover, he shoots and kills them both. Political contests, too, can be settled by gunshot...

No one imagines that a bedraggled migrant worker who turns up in town–least of all Gabriela herself–will be the agent of change. Nacib Saad has just lost the cook at his popular café and in desperation hires Gabriela. To his surprise she turns out to be a great beauty as well as a wonderful cook and an enchanting boon to his business. But what would people say if Nacib were to marry her?

Lusty, satirical and full of intrigue, Gabriela, Clove and Cinnamon is a vastly entertaining panorama of small town Brazilian life.

“An exciting and enjoyable romp of a book, rich in literary delights.” —The New York Times

“An enchanting and romantic novel . . . . A comedy vivid, believable, and entertaining.”—The Atlantic Monthly

“One hardly knows what to admire most: the dexterity with which [Amado] can keep half a dozen plots spinning, the gossamer texture of his writing, or his humor, tenderness and humanity.” —Saturday Review

Jorge Amado—novelist, journalist, lawyer—was born in 1912, the son of a cacao planter, in Ilheus, south of Salvador, the provincial capital of Gabriela, Clove and Cinnamon. His first novel, Cacao, was published when he was nineteen. It was an impassioned plea for social justice for the workers on Bahian cacao plantations; and his novels of the thirties and forties would continue to dramatize class struggle. Not until the 1950s did he write his great literary comic novels—Gabriela, Clove and Cinnamon, and Dona Flor and her Two Husbands—which take aim at the full spectrum of society even as they pay ebullient tribute to the region of his birth. One of the most reknowned writers of the Latin American boom of the sixties, Amado has been translated into more than 35 languages. A highly successful film version of Dona Flor was produced in Brazil in 1976. He died in 2001.
Loading...
or support indie stores by buying on