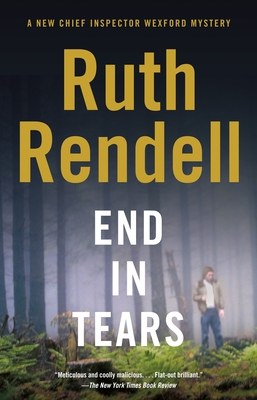 In End in Tears, Edgar Award winning author Ruth Rendell's Inspector Wexford has his work cut out for him: When Mavis Ambrose is killed by a falling chunk of concrete, the police have no reason to suspect mischief. However, the bludgeoning of the young and gorgeous Amber Marshalson that follows is clearly murder. In the midst of the hottest summer on record, Inspector Wexford is called in to investigate. He discovers the two cases may be linked, and that Amber was at the scene of Mavis’s death. When a third body is found, the case takes a disturbing and unexpected turn. The deeper Wexford digs, the darker the realities become, and what he finds leaves him feeling lost in a world absent of morals.

Ruth Rendell is the award-winning author of End in Tears, Harm Done, Road Rage, The Keys to the Street, Bloodlines, Simisola, and The Crocodile Bird, among many others. She has won the Mystery Writers of America Grand Master Award and was also the recipient of three Edgars from the Mystery Writers of America and four Gold Daggers from Great Britain’s Crime Writers Association. In 1997, she was named a life peer in the House of Lords. Ruth Rendell also wrote mysteries under the name of Barbara Vine, of which A Dark Adapted Eye is the most famous. She died in 2015.