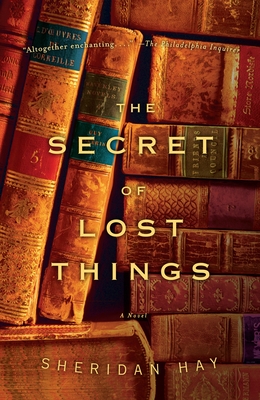 The Secret of Lost Things (Paperback)

Eighteen years old and completely alone, Rosemary arrives in New York from Tasmania with little other than her love of books and an eagerness to explore the city. Taking a job at a vast, chaotic emporium of used and rare books called the Arcade, she knows she has found a home. But when Rosemary reads a letter from someone seeking to “place” a lost manuscript by Herman Melville, the bookstore erupts with simmering ambitions and rivalries. Including actual correspondence by Melville, The Secret of Lost Things is at once a literary adventure and evocative portrait of a young woman making a life for herself in the city.

Sheridan Hay has worked in book stores (including the Strand) and in trade publishing for many years. She holds an MFA in writing and literature from Bennington, and has published short stories. She teaches writing in the graduate program at Parson's School of Design at the New School. This is her first novel.

Praise For The Secret of Lost Things…

“Altogether enchanting. . . . Anyone susceptible to the sorcery of books is likely to fall under the spell of this one.” —The Philadelphia Inquirer"An engrossing coming-of-age story full of intriguing secrets. . . . A memorable debut." —The Seattle Times"Intricate. . . . Hay interpolates passages by Melville, Auden, and Borges, skillfully using them to illuminate both the significance of the lost text and her heroine's interior journey." —The New Yorker"A lyrical, exciting writer. . . . The best way for a novelist to celebrate books is to write a good one. And The Secret of Lost Things is just that." —The New York Times Book Review
or support indie stores by buying on
(This book is on backorder)
Copyright © 2020 American Booksellers Association