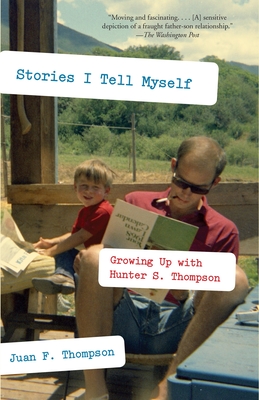 Stories I Tell Myself

Growing Up with Hunter S. Thompson

Hunter S. Thompson, “smart hillbilly,” boy of the South, born and bred in Louisville, Kentucky, son of an insurance salesman and a stay-at-home mom, public school-educated, jailed at seventeen on a bogus petty robbery charge, member of the U.S. Air Force (Airmen Second Class), copy boy for Time, writer for The National Observer, et cetera. From the outset he was the Wild Man of American journalism with a journalistic appetite that touched on subjects that drove his sense of justice and intrigue, from biker gangs and 1960s counterculture to presidential campaigns and psychedelic drugs. He lived larger than life and pulled it up around him in a mad effort to make it as electric, anger-ridden, and drug-fueled as possible.

Now Juan Thompson tells the story of his father and of their getting to know each other during their forty-one fraught years together. He writes of the many dark times, of how far they ricocheted away from each other, and of how they found their way back before it was too late.

He writes of growing up in an old farmhouse in a narrow mountain valley outside of Aspen—Woody Creek, Colorado, a ranching community with Hereford cattle and clover fields . . . of the presence of guns in the house, the boxes of ammo on the kitchen shelves behind the glass doors of the country cabinets, where others might have placed china and knickknacks . . . of climbing on the back of Hunter’s Bultaco Matador trail motorcycle as a young boy, and father and son roaring up the dirt road, trailing a cloud of dust . . . of being taken to bars in town as a small boy, Hunter holding court while Juan crawled around under the bar stools, picking up change and taking his found loot to Carl’s Pharmacy to buy Archie comic books . . . of going with his parents as a baby to a Ken Kesey/Hells Angels party with dozens of people wandering around the forest in various stages of undress, stoned on pot, tripping on LSD . . .

He writes of his growing fear of his father; of the arguments between his parents reaching frightening levels; and of his finally fighting back, trying to protect his mother as the state troopers are called in to separate father and son. And of the inevitable—of mother and son driving west in their Datsun to make a new home, a new life, away from Hunter; of Juan’s first taste of what “normal” could feel like . . .

We see Juan going to Concord Academy, a stranger in a strange land, coming from a school that was a log cabin in the middle of hay fields, Juan without manners or socialization . . . going on to college at Tufts; spending a crucial week with his father; Hunter asking for Juan’s opinion of his writing; and he writes of their dirt biking on a hilltop overlooking Woody Creek Valley, acting as if all the horrible things that had happened between them had never taken place, and of being there, together, side by side . . .

And finally, movingly, he writes of their long, slow pull toward reconciliation . . . of Juan’s marriage and the birth of his own son; of watching Hunter love his grandson and Juan’s coming to understand how Hunter loved him; of Hunter’s growing illness, and Juan’s becoming both son and father to his father . . .

Praise For Stories I Tell Myself: Growing Up with Hunter S. Thompson…

Excitement for Juan Thompson’s
STORIES I TELL MYSELF

“A journey of love and forgiveness . . . a portrait of Hunter as a human being, funny and fearful pages filled with drunk, smoky evenings, famous friends and admirers, extensive travels and financial uncertainty.”
-Alex Norcia, Salon

“A calm book about a wild man . . . A careful yet harrowing account of an offbeat childhood, and of a father-and-son relationship that grew very dark before it began to admit hints of light . . . The author evokes his life in the shadow of his looming father as if he were telling a sinister fairy tale.”
-Dwight Garner, The New York Times

“The stuff of legend . . . Astounding . . . Unsparing yet forgiving and affectionate.”
-Scott Stossel, editor of The Atlantic

“Moving and fascinating . . . A sensitive depiction of a fraught father-son relationship . . . Engaging . . . Adds depth and color to our understanding of Hunter S. Thompson.”
-Michael Lindgren, The Washington Post

“Stories I Tell Myself provides an intimate and unflinching look at the private life of one of the most distinctive—and funniest—writers and public personalities of our time.  Even those of us who were close to Hunter can learn from it.”
-Timothy Ferris, author of The Science of Liberty

“Turbulent but exciting . . . Shows clearly the occasional horrors of living with a substance-abusing celebrity but is also suffused with filial love and regret.”
-Kirkus

“A tender but tough tale of growing up as the son of the fearsome, charismatic and unrestrained writer, Hunter S. Thompson.  At the peak of his career, Hunter was a terrifying and neglectful parent, wreaking all kinds of damage on his family, but as his talent waned he learned to be a dutiful father, and doting grandparent.  All of this is observed acutely in painful and loving detail, in a book that will be seen as an essential piece of the Thompson history and also in its own right as a classic memoir of growing up weird.”
-Jann Wenner, co-founder and publisher of Rolling Stone

“A most difficult tale, beautifully and movingly told . . . narrated with such warmth and style it  makes this more than just another book about Hunter, but a most passionate exposition of the always difficult relationships between father and sons. Bravo.”
-Loren Jenkins, winner of the Pulitzer Prize in International Reporting

JUAN F. THOMPSON was born in 1964 outside of San Francisco, California, and grew up in Woody Creek, Colorado. He graduated from Tufts University and lives in Denver, Colorado, where he performs computer magic in the healthcare IT industry.
Loading...
or
Not Currently Available for Direct Purchase