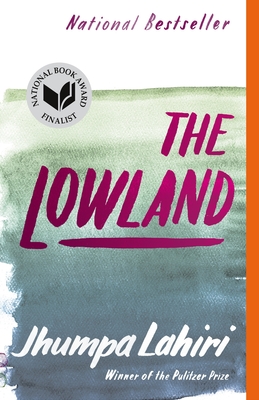 “In this epic tale, two brothers close in age but of very different temperaments are inseparable in their younger years in Calcutta. They become more distant as they mature, however, due to the political passions and ideology of the older, more outgoing brother. An ensuing tragedy forces the younger brother to evaluate his strong bond to his brother and to take on responsibilities he never expected. This is a story of decisions and consequences, family ties and separation, deceit and honesty, as well as cultural differences and similarities. Lahiri's exquisite prose is like quicksilver, sometimes shocking and sometimes warm and comforting.”
— Janice Shannon, BookTowne, Manasquan, NJ
View the List

The Lowland is an engrossing family saga steeped in history: the story of two very different brothers bound by tragedy, a fiercely brilliant woman haunted by her past, a country torn apart by revolution, and a love that endures long past death. Moving from the 1960s to the present, and from India to America and across generations, this dazzling novel is Jhumpa Lahiri at the height of her considerable powers.


Praise For The Lowland (Vintage Contemporaries)…

“Poised, haunting, exquisitely effective storytelling. . . . Lahiri is one of our most beautiful chroniclers of the aching disjunctions of emigration and family.”
—San Francisco Chronicle

“Exquisite. . . . Lahiri explores here what she has always explored best: the fragile inner workings of her characters. . . . An American master.”
—Philadelphia Inquirer

“[Lahiri’s] finest work so far. . . . At once unsettling and generous. . . . Shattering and satisfying in equal measure.”
—The New York Review of Books

“Poignant. . . . There is an important truth here—that life often denies us understanding, and sometimes all there is to hold on to is our ability to endure.”
—NPR

“Intriguing. . . . Brim[s] with pain and love and all of life’s profound beauty.”
—O, The Oprah Magazine

“In The Lowland, we are all emigrants, not from one country to another but from the present to the future. . . . Tremendous.”
—Lev Grossman, Time

“A masterful work that shines with brilliant language. . . . [Lahiri] has created a masterpiece.”
—Minneapolis Star Tribune

“Lahiri is an elegant stylist, effortlessly placing the perfect words in the perfect order time and again so we’re transported seamlessly into another place.”
—Vanity Fair

“The lowland [of the title] serves as Lahiri’s telling metaphor for the dark, dank, weedy places that haunt our lives. . . . In its quiet intensity, [The Lowland] reminds us of the triumphant fiction of Alice Munro and William Trevor.”
—Newsday

“A classic story of family and ideology at odds, love and risk closely twined. . . . An author, at the height of her artistry, spins the globe and comes full circle.”
—Vogue

“A master of dramatic turns, but not in the conventional sense. She lets tension build slowly until something snaps. What she twists is you. . . . Lahiri shows that a twist can be even more devastating when you’ve been afraid that it might happen all along. A”
—Entertainment Weekly

“Lahiri returns confidently to the themes that have earned her critical praise, an eager audience and a Pulitzer Prize. . . . [Here] she adds a historical dimension that creates a vital, intriguing backdrop. . . . [The] story is unique, but it’s also universal, a reminder of the past’s pull on us all.”
—The Miami Herald

“Expansive and intimate. . . . Lahiri’s writing is precise and restrained. . . . Loyalty and betrayal, lies and forgiveness, filial responsibility and abandonment, the choices and sacrifices we make to find our way in the world are beautifully wrought in this novel.”
—The Oregonian

“Subtle but devastating. . . . The themes of this beautifully written novel may be grand—love, ­revolution, desertion—but it’s an intimate tale that offers no easy answers.”
—Parade

“The kind of book that stays with you long after you finish it. . . . Full of sharp insights about marriage and parenthood, politics and commitment.”
—Pittsburgh Post-Gazette

“Delicately harrowing. . . . Lahiri has a devastatingly keen ear for the tensions and  misunderstandings endemic in our closest relationships.”
—Bloomberg News

“Udayan was the one brave enough to ask them for autographs…He was blind to self-constraints, like an animal incapable of perceiving certain colors. But Subhash strove to minimize his existence, as other animals merged with bark or blades of grass” (p. 11). How do the differences between the boys both strengthen and strain the tie between them?

Does Subhash’s decision to make it “his mission to obey (his parents), given that it wasn’t possible to surprise or impress them. That was what Udayan did” (p. 11) follow a pattern common among siblings? What part do their parents play in fostering the roles each boy assumes?

What does Udayan’s reaction to Subhash’s decision to go to America (p. 30) and Subhash’s admission that he wanted to leave Calcutta “not only for the sake of his education but also . . . to take a step Udayan never would” (p. 40) convey about the balance between admiration and envy, support and competition, that underlies their relationship? Do you think that Udayan is manipulative, or does Subhash misread him (p. 31)?

What aspects of the immigrant experience are captured in Subhash’s first impressions of Rhode Island (p. 34)? How do his feelings about school and about his roommate, Richard, bring to light both his pleasure and his uncertainties about his new independence? In what ways does Udayan’s letter add to his ambivalence about the choice he has made (p. 47)?

What does Subhash’s affair with Holly convey about his transition to life in America (pp. 65-83)? What does it reveal about his emotional ties to his old life and family?

Why does the author describe the courtship and marriage of Udayan and Gauri from Gauri’s perspective (pp. 51-61)? To what extent does Gauri’s independence, rare for women in India, influence their decision to marry?

How do the descriptions of Calcutta (pp. 88-90, 91-2) and Subhash’s first glimpse of his parents (p. 91) capture the complex feelings Subhash experiences on returning home? How do the brothers’ parents’ expectations and beliefs shape their treatment of Gauri?

What emotions lie behind his mother does his mother’s reaction to Gauri’s pregnancy (p. 114)? Is it understandable in light of Gauri’s behavior and manner? Is Subhash right to believe that the only way to help the child is to take Gauri away (p. 115)? What other motivation might he have for marrying his brother’s widow?

From the start, Gauri and Subhash react differently to Bela and to parenthood. Gauri thinks, “Bela was her child and Udayan’s; that Subhash, for all his helpfulness, for the role he’d deftly assumed, was simply playing a part. I’m her mother . . . I don’t have to try as hard” (p. 146). Although Subhash has a close, loving relationship with his daughter, he is troubled by his marriage: “Almost five years ago they had begun their journey as husband and wife, but he was still waiting to arrive somewhere with her. A place where he would no longer question the result of what they’d done” (p. 159). What is the source of the underlying uneasiness of their marriage? To what extent are they haunted by their attachments to Udayan? What other factors make Gauri feel resentful and trapped? Is Subhash partially responsible for her unhappiness? How does Subhash’s insistence on hiding the truth from Bela influence Gauri’s behavior and the choices she makes?

How does the portrait of the brothers’ mother, Bijoli, enhance the novel’s exploration of the repercussions of the family tragedy (pp. 179-89)? What effect does his visit to Calcutta and its many reminders of Udayan have on Subhash—as a son, a brother, and a father?

After Gauri the family, what does Bela rely on to make sense of the situation and to create a life for herself? Is her reclusiveness natural, given her family history, although much of it is unknown to her? In what ways do her decisions about her education and her work represent her need to separate and distinguish herself from her parents?

Why, despite his pride in Bela and his confidence in her affection, does Subhash feel “threatened, convinced that . . . Udayan’s influence was greater” (p. 225)? How might Bela’s life have been different had Udayan raised her?

The novel presents many kinds of parents—present and absent, supportive and reluctant. What questions does the novel raise about the challenges and real meaning of being a parent?

What do you find most striking or surprising about Gauri’s reflections on her life (p. 231-40)? “She had married Subhash, she had abandoned Bela. She had generated alternative versions of herself, she had insisted at brutal cost on these conversations. Layering her life only to strip it bare, only to be alone in the end” (p. 240). Is this an accurate and just self-assessment, or is Gauri too hard on herself—and if so, why?

Despite his accomplishments and relative contentment, Subhash remains in the grip of the deception that has dominated his life: “He was still too weak to tell Bela what she deserved to know. Still pretending to be her father . . . The need to tell her hung over him, terrified him. It was the greatest unfinished business of his life” (p. 251-52). Why does Bela’s pregnancy move him to reveal the truth? Were you surprised by Bela’s reaction? How does learning about Udayan and the story of her parents’ marriage?

The keeping of secrets plays a large part in the novel, from the facts of Bela’s parentage to Gauri’s long-hidden guilt about her role in Udayan’s fateful actions. To what extent are the continued deceptions fed by the love and sense of loyalty Gauri and Subhash feel toward Udayan even years after his death? Do they also serve Gauri’s and Subhash’s self-interest?

The details of the family’s history emerge through various retellings set in different times and seen from different perspectives. Why do you think Lahiri chose to tell the story in this way? How does this method increase the power of the narrative? Do your opinions of and sympathies for the characters change as more information is revealed?

Before reading The Lowland, were you aware of the Naxalite movement? (The group remains active: on May 25, 2013, Naxalite insurgents attacked a convoy of Indian National Congress leaders, causing the deaths of at least twenty-seven people.) What insights does Lahiri offer into the development of radical political groups? What role does history play in the creation of the Naxalite movement and, by extension, other uprisings around the world? What parallels do you see between the events described in the novel and recent activities in the Egypt and other countries torn by internal dissension and violence?

In an interview, Lahiri said, “As Udayan’s creator, I don’t condone what he does. On the other hand, I understand the frustration he feels, his sense of injustice, and his impulse to change society” (NewYorker.com, June 3, 2013) Does the novel help you see more clearly the reasons for destruction and deaths revolutionary forces perpetrate to attain their goals? How do you feel about Udayan after reading the novel’s last chapter?