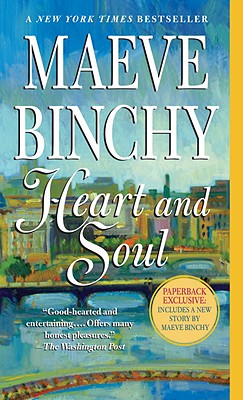 A story of patients and staff, family, and friends who are part of a heart clinic in a community caught between the old Ireland and the new.

Dr. Clara Casey has been offered the thankless job of establishing the underfunded clinic and agrees to take it on for a year. She has plenty on her plate already—two difficult adult daughters and the unwanted attentions of her ex-husband—but she assembles a wonderfully diverse staff devoted to helping their demanding, often difficult patients.

Before long the clinic is established as an essential part of the community, and Clara must decide whether or not to leave a place where lives are saved, courage is rewarded, and humor and optimism triumph over greed and self-pity.

"Good-hearted and entertaining.... Offers many honest pleasures." —The Washington Post

Praise For Heart and Soul…

"Good-hearted [and] entertaining . . . [Heart and Soul] reflects a pervasive generosity of spirit [and] offers many honest pleasures." –The Washington Post

"Heart and Soul is a pleasant escape into an entertaining fantasy world across the ocean. . . . [Binchy] once again paints a delightful picture of Ireland that elevates the everyday joys and tragedies of her characters to ones of pure romance." –Woodbury Magazine

“A new Maeve Binchy novel is always welcome. . . . Binchy has a true gift of creating characters we either know or wish we knew . . . Heart and Soul creates a perfect escape.” –The Plain Dealer

“At the end of a long week, a long winter, a long economic downturn, [Maeve Binchy’s Heart and Soul is] exactly what we need.” –Minneapolis Star Tribune

“Warm and comfy. . . . Reading Heart and Soul is not unlike getting a hug from your mother.” –The Globe and Mail (Toronto)

"[Maeve Binchy] knows how to fashion a minor drama into a crisis, and the book rattles along from one gripping story to another, leaving the reader with a satisfying glow. . . . It does exactly what it says on the tin: gives heart and soul." –Daily Mail

"[Heart and Soul] brings together the secret hopes and dreams of a disparate group of characters . . . with [Binchy's] trademark warmth and empathy." –Irish Sunday Independent

Have you read any of Maeve Binchy’s other books? If you’ve encountered any of these characters before, how did this new novel deepen your understanding of them? If you haven’t, which characters would you like to spend more time with?

It’s clear what the “heart” of the title refers to, but who-or what-is the “soul”?

The heart clinic is the embodiment of a new idea that advocates teaching people about their health without having to go to a hospital or to a doctor who may not have much time to spend with an individual patient. Why do you think the heart clinic is a good idea? Is there such a thing in your town or neighborhood?

There are many different mothers in the novel. Who does Binchy portray as a good mother? In what ways? Which mother would you most like to have as your own?

How are Binchy’s mother-daughter relationships different from her mother-son ones?

Why does Clara find it easier to be kind to Ania than to her daughters Adi or Linda?

Clara is a firm believer in the “curative powers of being busy” (page 23). How does this affect her in her career? In her personal life?

It is very difficult to make decisions about your parents when they are older. Was Hilary right to try to keep her mother at home with her?

There are two car accidents in the novel. How does each one change the course of the story?

Discuss the bigotry Ania faces, especially by Rosemary. In what ways is the treatment of new immigrants different in Ireland than it is in this country?

Several of the women have had relationships with abusive and entirely untrustworthy men. How does their prior history affect their current romances? Are these relationships healthier than the previous ones because of the men involved, or have the women themselves changed?

The pharmacist, Peter Barry, seems as if he would be a good husband. What made Clara realize that he wasn’t the man for her? Do you think she was right in her decision?

On page 148, Ania says, “I like this word peaceable. It’s what I would like to be.” Does she achieve this goal? How does her new-found peace help in her encounters with Rosemary?

Was Eileen Edwards genuinely delusional, or do you think she had another reason for blackmailing Father Flynn? What did you think of Johnny’s solution to Father Flynn’s problem? Who benefited the most from the resolution?

Twice in the novel, characters state, “We always regret what we don’t do, rarely what we do do.” Who follows this code to the greatest advantage? Is there anyone who should apply it but doesn’t?

Who is the most contented character in the novel? The most disappointed? What role does money play in their happiness?

On page 393, Declan says to Rosemary “May you get what you deserve in life.” Does she? Which of Binchy’s characters doesn’t?

Who was your favorite character and why?

What do you imagine happens next between Clara and Frank?