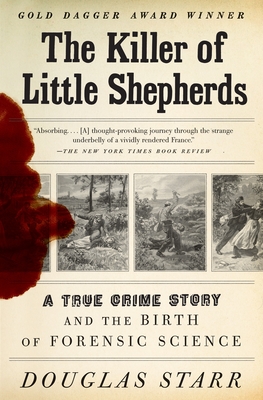 The Killer of Little Shepherds

Winner of the Gold Dagger Award

A fascinating true crime story that details the rise of modern forensics and the development of modern criminal investigation.

At the end of the nineteenth century, serial murderer Joseph Vacher terrorized the French countryside, eluding authorities for years, and murdering twice as many victims as Jack The Ripper. Here, Douglas Starr revisits Vacher's infamous crime wave, interweaving the story of the two men who eventually stopped him—prosecutor Emile Fourquet and Dr. Alexandre Lacassagne, the era's most renowned criminologist. In dramatic detail, Starr shows how Lacassagne and his colleagues were developing forensic science as we know it. Building to a gripping courtroom denouement, The Killer of Little Shepherds is a riveting contribution to the history of criminal justice.


Praise For The Killer of Little Shepherds: A True Crime Story and the Birth of Forensic Science…

“Gripping . . . Starr’s description of the legal, medical and even philosophical questions around Vacher’s responsibility are strikingly current.”
-Drew DeSilver, The Seattle Times

“The perfect true-crime book to curl up with on an autumn night.”
-Doug Childers, Richmond Times-Dispatch

“Riveting, yet cerebral . . . Besides focusing on Joseph Vacher, also known as the Killer of Little Shepherds, Starr explains and expands on the fascinating achievements of those studying the criminal world.”
-Elizabeth Humphrey, San Francisco Book Review

“Superior . . . This book is sensational and swift. But its real strength is the ability to show the history and progress of forensic science and its effect on the criminal justice system . . . This book reads like fiction and fascinates with fact.”
-Bethany Latham, Historical Novel Review

“Lively . . . With drama and stunning detail, Starr documents one of the earliest examples of criminal profiling, Vacher’s murders, his arrest, and the twists and turns of the trial that followed. The Killer of Little Shepherds is an important contribution to the history of criminal justice. It is crisply written, meticulously researched, and rich in historical detail.”
-Larry Cox, Tucson Citizen

“Fascinating . . . Compelling . . . Written with the dramatic tension of a good novel and the impeccable detail of a well-researched history.”
-Erika Engelhaupt, ScienceNews

“Deft . . . Admirable . . . Riveting . . . The Killer of Little Shepherds is deeply rooted in historical sources and subtle context, but Starr also has a journalist’s flair for the colorful detail.”
-John Williams, The Second Pass

“Expert . . . You’ll be richly rewarded . . . A good book that will keep you reading.”
-The Crime Segments blog

Douglas Starr is codirector of the Center for Science and Medical Journalism and a professor of journalism at Boston University. His book Blood: An Epic History of Medicine and Commerce won the 1998 Los Angeles Times Book Prize and became a PBS-TV documentary special. A veteran science, medical, and environmental reporter, Starr has contributed to many national publications, including Smithsonian, Audubon, National Wildlife, Sports Illustrated, the Los Angeles Times, The Christian Science Monitor, and Time, and has served as a science editor for PBS-TV. He lives near Boston.
Loading...
or support indie stores by buying on
(This book is on backorder)