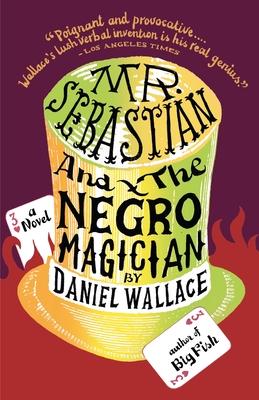 Mr. Sebastian and the Negro Magician

“Peculiar' and 'compelling' best describe this novel, where loss and identity are closely intertwined and where youthful misunderstandings can have lethal and heartbreaking consequences in adulthood. Wallace is a masterful storyteller, blurring the line between magic and reality.”
— Emily Crowe, Odyssey Bookshop, South Hadley, MA
View the List

Henry Walker was once a world-class magician, performing to sold-out shows in New York. But now he has been reduced to joining Musgrove's Chinese Circus (which at no point in its tour of the deep South has ever included a single Chinese person) as the shambling Negro Magician, whose dark black skin and electric green eyes bewitch most audiences. But one balmy Mississippi night in 1954, Henry disappears in the company of three rowdy white teens and is never seen again. Wallace pieces together Henry's incredible vagabond life – from a deal with a bone-white devil known only as Mr. Sebastian, to the heartrending loss of his sister Hannah – and creates an enchanting tale of love, loss, identity, and the limitation of magic.

Praise For Mr. Sebastian and the Negro Magician…

“Poignant and provocative. . . .Wallace's lush verbal invention [is] his real genius.” —Los Angeles Times“Powerful. . . . A magical and thoroughly absorbing story about the dangers and deceptions of appearances.”—Minneapolis-St. Paul Star-Tribune “Wallace writes with a heartbreaking kind of razzle-dazzle.”—USA Today“What a pleasure it is to be able to read a book and be able to say, without qualification, this is terrific. . . .This novel is Daniel Wallace's best.” —National Public Radio

Daniel Wallace is the author of three novels, Big Fish (1998), Ray in Reverse (2000) and The Watermelon King (2003). His stories have been published far and wide in many magazines and anthologies, including The Yale Review, The Massachusetts Review, Shenandoah and Glimmer Train, and his illustrated work has appeared in the L.A. Times and Italian Vanity Fair. Big Fish has been translated into 18 languages and was adapted for film by Tim Burton and John August, and is now available on DVD loaded with extras - including an interview with the author. He lives in Chapel Hill, North Carolina with his wife and son and teaches at the University of North Carolina, Chapel Hill.
Loading...
or support indie stores by buying on