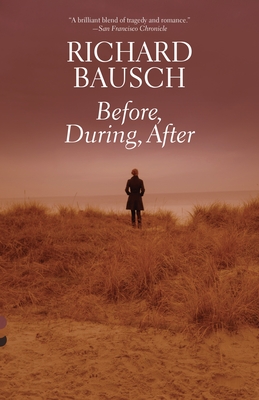 Before, During, After (Vintage Contemporaries)

Although they are separated in age by almost two decades, when Natasha, a young artist, meets Michael Faulk, a priest struggling with his faith, the stars seem to align. But shortly before their wedding day, as the terrorist attacks of 9/11 shake the country, cracks in their relationship begin to emerge. Cut off from one another for several terrifying hours, Natasha suffers an unimaginable private trauma, and her inability to speak of it inexorably divides their relationship into “before” and “after.” Gorgeously rendered and emotionally powerful, in Before, During, After one of our most distinguished storytellers charts the path of a relationship threatened by secrets.

Praise For Before, During, After (Vintage Contemporaries)…

“A brilliant blend of tragedy and romance.” —San Francisco Chronicle

“Elegantly constructed. . . . One of Richard Bausch’s many talents is the forthright ease with which he delivers his characters—and readers—to the gravest questions of love, faith and ultimately God, even as he nimbly hides the answers in plain sight.” —The New York Times Book Review

“An intensely personal drama. . . . As he empathetically investigates his characters, Bausch uncovers thoughts and feelings as tangled and troubled as the world around them.” —The Boston Globe

“[A] terrific novel. . . . Bausch has found a way to connect the optimism that died [on 9/11] with the hopes and dreams that we take into our intimate relationships. They can collapse, too. And often we don’t even see it coming. . . . [He is] a master storyteller who appreciates subtleties most of us can’t see, much less write.” —The Seattle Times

“Masterful prose, in the service of a masterfully told story. . . . [Before, During, After] would have been over-reach for a lesser writer, but Bausch pulls it off by displaying the utmost care for his characters, employing the highest form of authorial omnipotence to show how external horrors reverberate in internal spaces.” —The Daily Beast

“A quietly lovely book, well-written and sad, but with the possibility of triumph.” —The Post and Courier (Charleston)

“Skillfully crafted. . . . Taut and restrained. . . . Bausch is a powerful evocator. . . . [He] courageously tackles a difficult conundrum in fiction: how to fictionalize—that is how to make art—out of unspeakable evil taken from life.” —New York Journal of Books

“Sublimely probing what it means to lose trust in one’s self and in those one loves, the masterful Bausch delicately ponders the consequences of devastating loss on both a grand and personal scale. A luscious, sweeping heartbreak of a novel.” —Booklist (starred review)

Richard Bausch is the author of twelve novels and eight volumes of short stories. He is a recipient of many awards, including the PEN/Malamud Award, a Guggenheim Fellowship, the Lila Wallace–Reader’s Digest Writers’ Award, the Literature Award from the American Academy of Arts and Letters, the Dayton Literary Peace Prize, and, in 2012, the Rea Award for the Short Story. He currently teaches in The Writing Program at Chapman University in Orange, California.