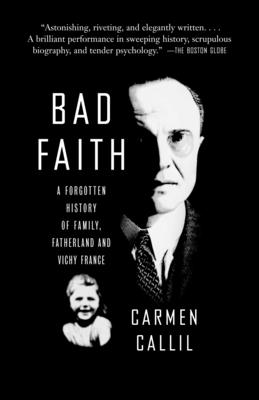 A Forgotten History of Family, Fatherland and Vichy France

Bad Faith tells the story of one of history’s most despicable villains and con men—Louis Darquier de Pellepoix, Nazi collaborator and “Commissioner for Jewish Affairs” in France’s Vichy government.Darquier set about to eliminate Jews in France with brutal efficiency, delivering 75,000 men, women, and children to the Nazis and confiscating Jewish property, which he used for his own gain. Carmen Callil’s riveting and sometimes darkly comic narrative reveals Darquier as a self-obsessed fantasist who found his metier in propagating hatred—a career he denied to his dying day—and traces the heartrending consequences for his daughter Anne of her poisoned family legacy. A brilliant meld of epic sweep and psychological insight, Bad Faith is a startling history of our times.

Praise For Bad Faith: A Forgotten History of Family, Fatherland and Vichy France…

“Astonishing, riveting, and elegantly written. . . . A brilliant performance in sweeping history, scrupulous biography, and tender psychology.” —The Boston Globe“Darquier [was] one of the monsters of French history. . . . [Callil’s] account of France’s descent into the anti-Semitic maelstrom is dramatic.” —The New York Times Book Review“Callil has written a fascinating book about this monster. . . . Bad Faith is an often moving book, as well as an improbably funny one—a study of awfulness made unexpectedly poignant by the author’s own stake in the subject.” —Harper’s“Much more than the story of one family’s dark secrets. This book becomes a quietly devastating history of Vichy France’s anti-Semitic machinations.” —The New York Times

Carmen Callil was born in Australia and moved to England, where she began working in the publishing industry. In 1972 she founded Virago, publishing such authors as A.S. Byatt, Angela Carter, and Toni Morrison. She was subsequently Managing and Publishing Director of Chatto & Windus, publisher-atlarge for Random House UK, and Director of Channel 4 Television. The recipient of numerous honorary degrees, she is a Fellow of the Royal Society for the Arts and co-author of The Modern Library.
Loading...
or
Not Currently Available for Direct Purchase