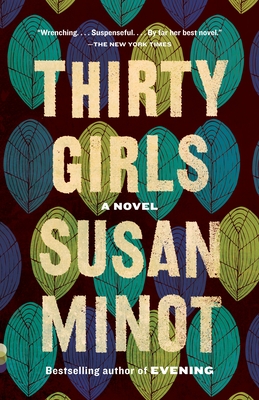 Esther Akello is one of thirty Ugandan teenage girls abducted from a Catholic boarding school by rebel bandits. Held captive by the Lord’s Resistance Army, Esther is forced to witness and commit unspeakable atrocities. She struggles to survive, to escape, and to find a way to live with what she has seen and done. Jane Wood is a sensual, idealistic American writer who is traveling across Africa, hoping to give a voice to young people like Esther and to find her own center.
In unflinching prose, Minot interweaves the stories of these two astonishing young women who, as they confront displacement and heartbreak, are hurtled inexorably closer to one another. With mesmerizing emotional intensity and stunning evocations of Africa’s struggles and beauty, Susan Minot gives us her most brilliant novel yet.

“Extraordinary. . . . Panoramic. . . . Poetic. . . . Minot shows her readers that war zones cannot be contained within one country, or one region. When cruelty and violence reign, we are all at risk.” —NPR

“A book about the relativity of pain; the grace of forgiveness; and the essential unknowability of a lover.” —The Daily Beast

“A novel of quiet humanity and probing intelligence. . . . Susan Minot takes huge questions and examines them with both a delicate touch and a cleareyed, unyielding scrutiny.” —The New York Times Book Review

“Africa—described in Minot’s muscular, evocative, and unflinching prose—offers itself up to Jane in all its beguiling beauty, its unremitting violence, and breaks her open like an egg.” —MORE Magazine

“Visually intense. . . . Minot’s writing is so potent and the story told so tragic, the novel sears the mind.” —New York Daily News

“Daring. . . . Minot’s cleanly sculpted prose and capacity to penetrate and open the mind and heart challenge us to step outside our comfort zone. Finally, there comes this realization: Esther and Jane aren’t so different at all. We recognize their stories as ours. . . . Minot succeeds, through her fictionalized version, in making us care as much as she does.” —O, The Oprah Magazine

“When there is a story the world needs to know, does it matter who tells it, or just that it gets told?. . . Minot tells both stories with such harsh, lyrical beauty that neither is easy to forget. Grade: A-.” —Entertainment Weekly

“Exquisitely poignant and painfully credible. . . . [A] heart-rending story, with [an] honest and bleak view of the power of love to heal so much human breakage.” —Minneapolis Star Tribune

“Exceptional. . . . A fragile but unmistakable note of hope.” —Elle

“Gripping. . . . Sensual. . . . Immediate. . . . Minot wants to do more than sound a drumbeat of atrocities. . . . She wants to use literature to transmute a human horror into something that can be understood and in time healed.” —The Miami Herald

“Excellent, evocative. . . . Thirty Girls sketches the landscape with impressionist strokes and then burrows in to view the cruelties people can visit on one other and themselves.” —The Seattle Times

“Thirty Girls conveys an important story that people need to hear. . . . Esther is a stunning character whose strength and bravery is an inspiration to readers.” —Pittsburgh Post-Gazette

“A novel as raw, beautiful, and seemingly serendipitous as the politics, landscape, and culture of the sub-Saharan Africa it describes.” —Shelf Awareness

Susan Minot is an award-winning novelist, short-story writer, poet, and screenwriter. Her first novel, Monkeys, was published in a dozen countries and won the Prix Femina Étranger in France. Her novel Evening was a worldwide best seller and became a major motion picture. She teaches at New York University and lives with her daughter in New York City and on North Haven island Maine.
Loading...
or
Not Currently Available for Direct Purchase