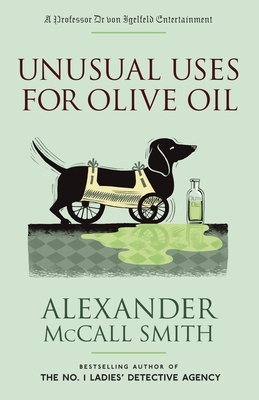 Welcome to the insane and rarified world of Professor Dr Moritz-Maria von Igelfeld of the Institute of Romance Philology. Von Igelfeld is engaged in a never-ending quest to win the respect he feels certain he is due—a quest which has the tendency to go hilariously astray.

In Unusual Uses for Olive Oil, von Igelfeld experiences a series of new adventures.  First, he finds that his academic rival Detlev-Amadeus Unterholzer has been winning undeserved recognition, a situation that must be addressed. Then von Igelfeld stumbles toward a romance with Frau Benz, a charming widow who owns her very own Schloss and a fleet of handsome cars—that is, until a faux pas lands him on the curb. Later, while on the annual student study retreat in the Alps, von Igelfeld fearlessly plunges 3000 feet into mountaineering history, and turns his survival into the subject of inspirational lectures. Finally, at a dinner party, he is the only kind soul who can aid an unfortunate dachshund whose sticky wheels are in need of lubrication.

"Filled with comic characters, all academics of a particularly stripe. . . . McCall Smith has the same gift that John Mortimer has in making boring conversations hilarious—the atmosphere in the Institute of Romance Philology’s coffee room is very like the one-upmanship and backbiting in Horace Rumpole’s chambers. Academia can be a hoot, and this series proves it."
--Booklist

"A comedic jewel... [At the Villa of Reduced Circumstances] attains a level of sublime nonsense reminiscent of Woody Allen's Bananas." --The New York Times

“In the halls of academe, a setting fraught with ego-driven battles for power and prestige [McCall Smith] has rendered yet another one-of-a-kind character: the bumbling but brilliant Dr. Mortiz-Maria von Igelfeld . . . . [a] deftly rendered trilogy [with] endearingly eccentric characters.” —Chicago Sun-Times

ALEXANDER McCALL SMITH is the author of the No. 1 Ladies' Detective Agency series, the Isabel Dalhousie series, the Portuguese Irregular Verbs series, the 44 Scotland Street series, and the Corduroy Mansions series. He is professor emeritus of medical law at the University of Edinburgh in Scotland and has served with many national and international organizations concerned with bioethics. He was born in what is now known as Zimbabwe and was a law professor at the University of Botswana. He lives in Scotland. Visit his website at www.alexandermccallsmith.com.
Loading...
or support indie stores by buying on