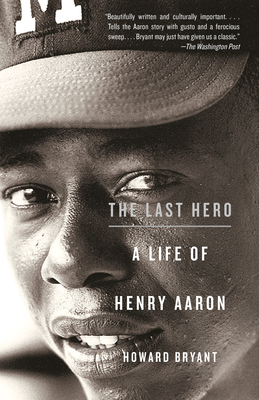 This definitive biography of Henry (Hank) Aaron—one of baseball's immortal figures—is a revelatory portrait of a complicated, private man who through sports became an enduring American icon.

“The epic baseball tale of the second half of the 20th century.” —Atlanta Journal Constitution

After his retirement in 1976, Aaron’s reputation only grew in magnitude. But his influence extended beyond statistics. Based on meticulous research and extensive interviews The Last Hero reveals how Aaron navigated the upheavals of his time—fighting against racism while at the same time benefiting from racial progress—and how he achieved his goal of continuing Jackie Robinson’s mission to obtain full equality for African Americans, both in baseball and society, while he lived uncomfortably in the public eye.


Praise For The Last Hero: A Life of Henry Aaron…

“Beautifully written and culturally important . . . tells the Aaron story with gusto and a ferocious sweep. . . . Bryant may just have given us a classic.”
—The Washington Post

“A welcome and long-overdue portrait . . . thoughtful, insightful and deeply engaging. . . . It easily stands as one of the most impressive profiles of a ballplayer in years.”
—San Francisco Chronicle

“Bryant is a great writer for a great subject. . . . Mr. Aaron’s story is the epic baseball tale of the second half of the 20th century.”
—Atlanta Journal Constitution

“Impressive. . . . Nuanced. . . . For baseball junkies, The Last Hero offers enough about ballplayers of the era and the game to amply satisfy. But fortunately this book offers more. This is not mere hagiography. This is the tale of a man performing in the public eye, laboring under a persona projected by others with preconceptions of their own, but who gradually moves forward in his quest for self-determination.”
—Bill Nowlin, The Boston Globe

“Brawny. . . . The Last Hero had the forceful sweep of a well-struck essay as much as that of a first-rate biography.”
—The New York Times

“The best baseball biography to come along in years, a work that fuses the storytelling acumen of a David Halberstam with the sensitivity for race and sport embodied by writers such as Dave Zirin and William Rhoden. . . . For readers eager to know the man behind the numbers and the footage, Bryant hits one out of the park.”
—The Bay State Banner

“Perfect for the sports fan and the history buff.”
—Good Morning America

“No one was more important to the game of baseball in the last half of the 20th century than Henry Aaron and no one writes about that supremely talented man, that tumultuous time and this treasure of a game better than Howard Bryant. Together, they are an extraordinary combination, and the book Bryant has written gets to the heart of the complicated and dignified, patient and consistent genuine hero that is Henry Aaron.”
—Ken Burns

“Marvelous. . . . Wrists, legs, heart, brain—here is the full picture of a great man and ballplayer who finally gets his due.”
—David Maraniss, author of Clemente

“There will surely be other books on Hank; there may never be a better book on Henry Aaron than Bryant’s The Last Hero.”
—Mobile Press-Register

“A fascinating and at times a troubling book, which revivified the lovely old game for me.”
—Tracy Kidder

“A must read for baseball fans of every generation.”
—Booklist

“We already know Henry Aaron as one of the greatest players in the history of baseball.  Now, in Howard Bryant’s impeccably researched and nuanced biography, we know Henry Aaron not just as a great ballplayer, but as a remarkable man. In The Last Hero Bryant asks the hard questions and cuts through the myths to create a timeless and unflinching portrait of an American icon and his times.  And as in any great biography, in learning about Aaron’s life we also learn something about our own.”
—Glenn Stout, series editor, The Best American Sports Writing