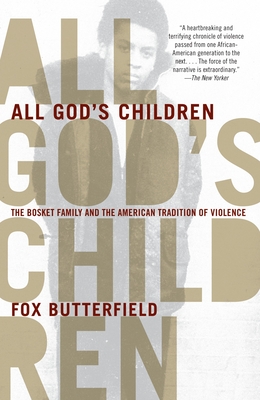 The Bosket Family and the American Tradition of Violence

A timely reissue of Fox Butterfield’s masterpiece, All God’s Children, a searing examination of the caustic cumulative effect of racism and violence over 5 generations of black Americans.

Willie Bosket is a brilliant, violent man who began his criminal career at age five; his slaying of two subway riders at fifteen led to the passage of the first law in the nation allowing teenagers to be tried as adults. Butterfield traces the Bosket family back to their days as South Carolina slaves and documents how Willie is the culmination of generations of neglect, cruelty, discrimination and brutality directed at black Americans. From the terrifying scourge of the Ku Klux Klan during Reconstruction to the brutal streets of 1970s New York, this is an unforgettable examination of the painful roots of violence and racism in America.

Praise For All God's Children: The Bosket Family and the American Tradition of Violence…

“A heartbreaking and terrifying chronicle of violence passed from one African-American generation to the next. . . . The force of the narrative is extraordinary.” —The New Yorker

“If posterity knows what it is doing, this book will be considered a classic of the violent decades.” —The Atlantic Monthly

“An extraordinary book. . . . A stimulating and chilling account of violence in America.” —The Boston Globe

“Butterfield’s research is creative, his narrative is compelling. . . . The book’s excellence is present on every page.”
—The New York Times

Fox Butterfield is the author of China: Alive in the Bitter Sea, which won the National Book Award. He was a member of the New York Times reporting team that won the Pulitzer Prize for its publication of the Pentagon Papers, and has served as a correspondent for the newspaper in Boston, Washington, DC, New York, South Vietnam, Japan, Hong Kong, and China--where he opened the Beijing bureau in 1979. He is currently a national correspondent for the NY Times, writing about crime and violence. He lives near Boston with his family.