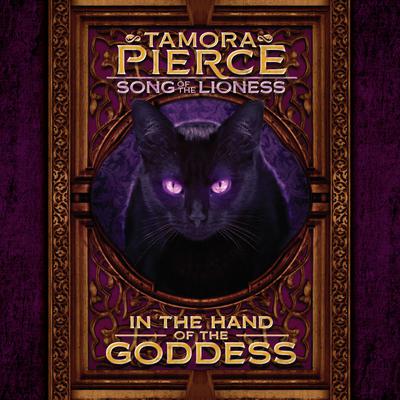 In the Hand of the Goddess (Digital Audiobook)

Song of the Lioness #2

Disguised as a boy, Alanna of Trebond becomes a squire -- to none other than the prince of the realm. But Prince Jonathan is much more to Alanna; he is her ally, her best friend, and one of the few who knows that she's really a girl. Now it will take all of Alanna's awesome skill, strength, and growing magical powers to protect him from the mysterious evil sorcerer who is bent on his destruction--and hers!

Here continues the story of Alanna, a young woman bound for glory who is willing to fight against enormous odds for what she believes in.

In the sixth grade, Tamora Pierce was encouraged by her father to start writing and she immediately got hooked. Once she discovered fantasy and science fiction, she tried to write the same kind of stories she read, only with teenaged girl heroines who were usually missing from the 1960s stories.

Before her junior year at the University of Pennsylvania where she studied psychology, Pierce rediscovered writing when she wrote her first original short story since tenth grade. She sold her first story a year later and then enrolled in a fiction writing course during her senior year. When her teacher suggested that she tackle a novel, her childhood ideas came back to her and she began her first sword and sorcery novel.

Pierce then worked as a housemother in an Idaho group home for teenaged girls, who loved hearing Alanna’ s story from the in-progress quartet, Song of the Lioness. As Pierce continued to write and send out manuscripts, she moved to Manhattan to get her publishing career off the ground.

Pierce still lives in Manhattan with her husband, writer/filmmaker Tim, and their three cats, two parakeets, plus a floating population of rescued wildlife. She enjoys her hectic life as a full-time writer and she hopes that her books leave her readers with the feeling that they can achieve anything if they want it badly enough.

Tamora Pierce is a popular author of fantasy books for teenagers. In her latest quartet, Protector of the Small, readers follow heroine Kel as she rigorously trains for the knighthood.