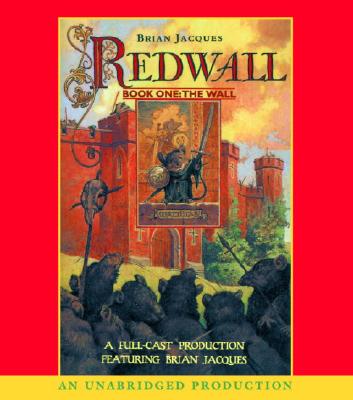 When Redwall was published in 1987 it catipulted author Brian Jacques to international stardom. And small wonder! This enthralling tale is jam-packed with the things we long for in a great adventure: danger, laughter, hairbreath excapes, tragedy, mystery, a touch of wonder, a truly despicable villain, and a hero we can take to heart.

That hero is Matthias, a young mouse who must rise above his fears and failures to save his friends at Redwall Abbey. The villain is Cluny the Scourage, one of the most deliciously despicable rats of all time. The unforgettable cast of supporting characters includes the stalwart badger Constance, an irrepressible hare named Basil Stag Hare, and the elderly wisemouse Brother Methuselah.

But most of all there is Matthias, seeking his true destiny in a journey that will lead through danger and despair to true wisdom.

Praise for Redwall and the Novels of Brian Jacques

“Jacques extols the virtues of honor and valor…[The Redwall Novels] are a good read, with enticing maps, plenty of songs, a dose of natural history, and loads of excitement, charm, and humor.”—The Irish Times

“Children are privileged to enter the rich world of Redwall and Mossflower. So are the parents who get to come along.”—The Boston Phoenix

“A grand adventure story. Once the reader is hooked, there is no peace until the final page.”—Chicago Sun-Times

“The Redwall books...add a touch of chivalry and adventure reminiscent of the King Arthur stories.” —Arkansas Democrat-Gazette

“Jacques’s effortless, fast-paced narrative gets its readers quickly hooked. He clearly loves this other world he has created—there’s a genius sense of involvement and care (lots of lovingly descriptive passages), as well as an overflowing, driving imagination.”—Birmingham Post

“A richly imagined world in which bloody battles vie for attention with copious feasting and tender romancing.”—The Cincinnati Enquirer

Brian Jacques has had many professions, including longshoreman, truck driver, and folk singer. In addition to his vast readership, Brian has earned a devoted army of listeners with his weekly radio program on BBC Merseyside. For this recording Brian himself leads a full cast of actors in bringing to life the advantures of the inhabitants of Redwall Abbey.
Loading...
or
Not Currently Available for Direct Purchase