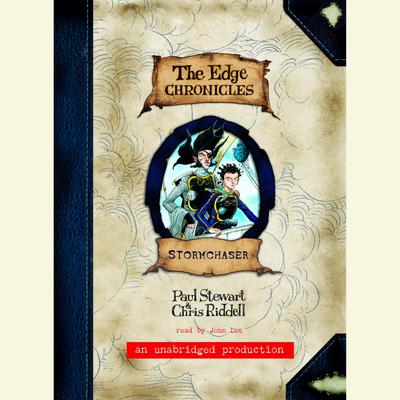 Step to the Edge and enter a thrilling new fantasy series filled with amazing characters and unimaginable adventures–and see for yourself what lies beyond!

Far, far away, jutting out into the emptiness beyond, lies the Edge. Both the land and the air are filled with strange peoples and terrifying creatures; action–and danger–await at every turn. On board the famous sky ship Stormchaser, Twig eagerly looks forward to the adventure and excitement that lie ahead in his new life as a sky pirate. The crew’s quest: to collect stormphrax–the precious substance created at the heart of a Storm the very moment it unleashes its most intense power. Only a sky ship as powerful as the Stormchaser, piloted by a man as brave and fearless as Cloud Wolf, could risk entering such a storm. . . .

Chris Riddell has illustrated many books for children and has been shortlisted for the Kate Greenaway Medal and the Kurt Maschler Award. He is also the acclaimed political cartoonist for the Guardian and the Observer. He lives in Sussex, England.