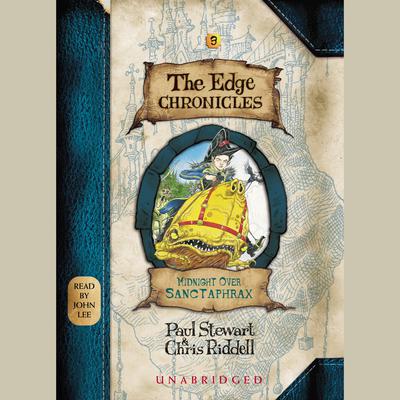 Midnight Over Sanctaphrax (The Edge Chronicles)

Far over the Edge, a mighty storm is brewing - a whirling vortex of immense power and unimaginable ferocity that is essential to the survival of the Edgelands. In its path is Sanctaphrax - a magnificent city built on a floating rock and tethered to the land by a massive chain. Sailing over the Edge and into the maelstrom itself, Twig - a young sky pirate captain - is the only Edgelander to learn of the approaching danger. But the perilous voyage destroys his sky ship, hurling his crew far into - and beyond - the Deepwoods, and robbing Twig of all memory.

Setting out for the Deepwoods, Twig is determined to gather together his lost crew. But will his journey help unlock his memory too? For if no action is taken, Sanctaphrax will be at the mercy of the Storm, the Edgewater River will cease flowing - and a stagnant darkness will spread out like a vast fungus over every inch of the edgelands.

Brilliantly illustrated and filled with highly original characters - from trogs and goblins, to savage cloddertrogs, treacherous shrykes and gruesome waifs - Midnight Over Sanctaphrax can be read as a single action-packed adventure or as the final triumphant tale in a magnificent fantasy trilogy.