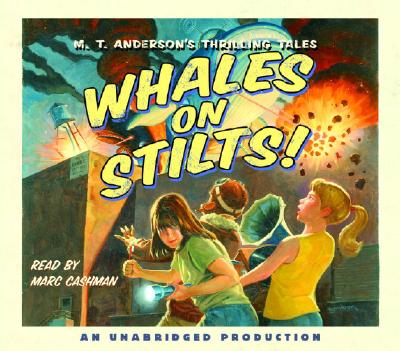 Lily Gefelty is just an average twelve-year-old girl. But her dad–a normal-enough seeming guy–just so happens to work for an evil genius who plans to unleash an army of extremely cranky, stilt-walking, laser-beam-eyed whales upon the world. Lucky for Lily, her two best friends are anything but average. Both of them are famous for their adventures. Jasper Dash, Boy Technonaut, invents gadgets; Katie Mulligan spends her spare time fighting off zombies and were-goats. Surely they'll know what to do. And if they don't? then it will be up to Lily–average, everyday Lily–to come up with a plan.

With this crazy comic ride of a novel, M. T. Anderson launches a riotous and wonderfully weird new series for listeners who like their thrilling tales with tongue firmly in cheek.

M. T. Anderson is the author of several books for children and young adults, including "Feed," which was a National Book Award Finalist and winner of the Los Angeles Times Book Prize. M. T. Anderson lives in Cambridge, Massachusetts. "From the Audio Download edition."
Loading...
or
Not Currently Available for Direct Purchase