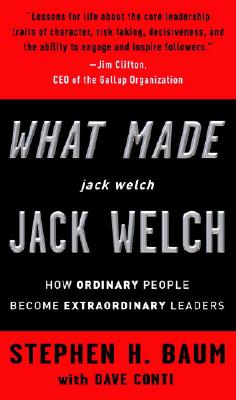 Surprisingly, it's not about education or pedigree or even native smarts. Most of us are like jack welch, who started life as a lowercase guy, the son of a railroad conductor, but went on to become the most celebrated and successful executive of recent years. Sure, Jack Welch and lots of other people like him are smart and talented, but there are countless people even smarter and more talented who stall out on the way up. Something else is going on. What is it, and what can the rest of us learn from such people to improve our own chances of accomplishment?
Stephen Baum uncovers not only the business secrets of prominent CEOs but their inner stories as well. He ferrets out the real men and women behind the public personas, learning about life-shaping experiences they all have in common that turn out to be the foun-dation for true success in career and in life. Baum has gotten them to recall key moments that they hadn t thought about for years, as well as the fears, emotions, and learning they ve experienced during moments of challenge and doubt.
These seminal events are archetypal shaping experiences critical and often unexpected learning moments when future leaders take advantage of challenges thrown in their path:
When you take calculated personal risks without the safety net of specific instructions on how to proceed.
When you are clueless about how to solve a knotty problem but dive in and prepare yourself to work through it.
When you learn to swim in water over your head, make the tough choice, get good on your feet, or
are forced to take a hard look in the mirror. These character-building moments engender an inner core of toughness and confidence that is the real key to leadership in any business or endeavor they are what made jack welch . . . JACK WELCH.
Stephen Baum provides an entirely new way of thinking about how to fulfill your dreams and aspirations. You ll come away with the feeling that if they can do it, so can I . . . and that is the first step on the journey to becoming extraordinary, awakening the JACK WELCH that lives in each of us just waiting to take us further than anyone could have predicted.

STEPHEN H. BAUM has been an adviser and coach to CEOs for more than twenty years, first as a partner with Booz Allen Hamilton, now as an independent practitioner and director of the Point Group Network. In addition to his private practice, Mr. Baum chairs a group of New York City CEOs who help one another with sensitive personal and business issues under the aegis of the CEO membership organization Vistage International. He also hosts Inside the CEO, a leadership development series at Baruch College in which he conducts unscripted Q&A sessions with well-known CEOs about life experiences that prepared them to lead. Through Harvard Community Partners of Connecticut, Mr. Baum leads workshops in leadership excellence for executive directors and board chairs of not-for-profits.

DAVE CONTI is a writer and editor specializing in business and self-help topics. Formerly, he was executive editor at HarperCollins Publishers, where he edited and published books by many distinguished authors.
Loading...
or
Not Currently Available for Direct Purchase