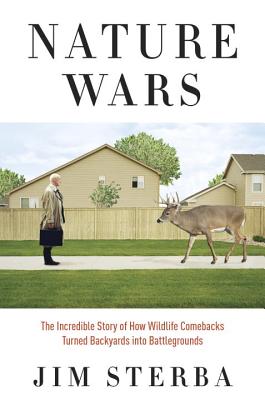 The Incredible Story of How Wildlife Comebacks Turned Backyards Into Battlegrounds

This may be hard to believe but it is very likely that more people live in closer proximity to more wild animals, birds and trees in the eastern United States today than anywhere on the planet at any time in history. For nature lovers, this should be wonderful news -- unless, perhaps, you are one of more than 4,000 drivers who will hit a deer today, your child's soccer field is carpeted with goose droppings, coyotes are killing your pets, the neighbor's cat has turned your bird feeder into a fast-food outlet, wild turkeys have eaten your newly-planted seed corn, beavers have flooded your driveway, or bears are looting your garbage cans.
For 400 years, explorers, traders, and settlers plundered North American wildlife and forests in an escalating rampage that culminated in the late 19th century's era of extermination. By 1900, populations of many wild animals and birds had been reduced to isolated remnants or threatened with extinction, and worry mounted that we were running out of trees. Then, in the 20th century, an incredible turnaround took place. Conservationists outlawed commercial hunting, created wildlife sanctuaries, transplanted isolated species to restored habitats and imposed regulations on hunters and trappers. Over decades, they slowly nursed many wild populations back to health.
But after the Second World War something happened that conservationists hadn t foreseen: sprawl. People moved first into suburbs on urban edges, and then kept moving out across a landscape once occupied by family farms. By 2000, a majority of Americans lived in neither cities nor country but in that vast in-between. Much of sprawl has plenty of trees and its human residents offer up more and better amenities than many wild creatures can find in the wild: plenty of food, water, hiding places, and protection from predators with guns. The result is a mix of people and wildlife that should be an animal-lover's dream-come-true but often turns into a sprawl-dweller's nightmare.
"Nature Wars" offers an eye-opening look at how Americans lost touch with the natural landscape, spending 90 percent of their time indoors where nature arrives via television, films and digital screens in which wild creatures often behave like people or cuddly pets. All the while our well-meaning efforts to protect animals allowed wild populations to burgeon out of control, causing damage costing billions, degrading ecosystems, and touching off disputes that polarized communities, setting neighbor against neighbor. Deeply researched, eloquently written, counterintuitive and often humorous "Nature Wars" will be the definitive book on how we created this unintended mess.

Praise For Nature Wars: The Incredible Story of How Wildlife Comebacks Turned Backyards Into Battlegrounds…

"The facts about wildlife resurgence that Sterba present in his mind-bending dispatch from the new world of "people-wildlife conflicts" are startling and staggering." - Chicago Tribune

"Smart and provocative...Nature Wars is a counterintuitive take on a social problem, and the tone is knowing and smart, not sarcastic or snide." - Chicago Tribune

"This is an excellent introduction to a “problem” that is often one of human perception." - Booklist, starred review

"Jim Sterba employs humor and an eye for the absurd to document the sometimes bizarre conflicts that arise as a consequence of America's transformed relationship with nature...  An eye-opening take on how romantic sentimentalism about nature can have destructive consequences." - Kirkus, starred review

"Sterba provocatively and persuasively argues that just at the moment when humankind has distanced itself irrevocably from nature, its behavior patterns have put people in conflict with a natural world that they don’t know how to deal with...A valuable counternarrative to the mainstream view of nature-human interaction." - Publisher's Weekly

“In this elegant and compelling tour of America’s mutating connections with its land and wildlife, Jim Sterba uses wit and insight to reveal new and unintended consequences of human sprawl and the ways in which they have shaped today’s relationships with Nature.”  -John H Adams , Founding Director , Natural Resources Defense Council

“It's a jungle out there - and we're living in it. Jim Sterba's Nature Wars is a smart, stylish and altogether provocative account of how we are confounded by that which we claim to hold so dear - Mother Nature and all her creatures moving in right next door.” --Tom Brokaw

“Jim Sterba describes a cockeyed country whose denizens spend billions to imitate "nature" in their own small domains, little realizing that their excess creates an environment to which other species are fatefully drawn in increasing, sometimes alarming numbers; that they themselves are the creatures who throw this shared habitat out of whack.  An unusual feat of deep and sustained reporting, Nature Wars is full of surprises and marked, from first page to last, by uncommon sense, graceful writing and precious wit.” – Joseph Lelyveld, author of Great Soul: Mahatma Gandhi and His Struggle with India

“Quite unintentionally and with little awareness by its inhabitants, over the past century the Eastern United States has become one of the most heavily forested and densely populated regions in world history.  Nature Wars explores this marvelous story of environmental recovery and the opportunities and challenges that it brings to its residents and the entire globe in fascinating detail and with great insight by Jim Sterba.  This is a great book and a story with lessons for us all.” – David Foster, Ecologist and Director of the Harvard Forest, Harvard University

“If there is one lesson to be learned from Jim Sterba’s book, it is: Be careful what you wish for. Having decimated our planet’s natural state, we are blithely over-compensating, over –correcting and overturning the balance of nature yet again. Nature, as seen by most of us through a double glazed picture window revealing a manicured lawn….but what’s that moose being chased by a coyote being chased by a black bear, doing there?  Read Nature Wars and weep. Or at least, stop and think.” – Morley Safer

"In this book, Jim Sterba has given us a fascinating, powerful, and important lesson in why we should be careful when we mess with Mother Nature.” – Winston Groom, author of Forrest Gump

“At last someone’s grappling with the elephant in the room – or rather the deer, the coyote, the beaver, the bear, all these damn animals crowding into our living space. Sterba’s book may strike some as observational comedy but he’s deadly serious. Every word rings true. Nature is vengeful. All I can say is, he better not take a walk in his backyard without a shotgun.” – John Darnton, Pulitzer Prize-winning journalist and author of Almost a Family

“A wonderful, thought-provoking, important book that will overturn everything you thought you knew about wildlife in America. Jim Sterba confronts the shibboleths that make man-versus-beast conflicts so vexing, divisive, and fascinatingly complex." – David Baron, author of The Beast in the Garden

“It’s a truly original piece of work, often – I would say – inspired, told in a pitch-perfect voice, just north of sarcastic and south of appalled. At any event, a terrific read on a subject that is all around us yet largely unobserved.” Ward Just, author of Rodin’s Debutante

"Anything Jim Sterba writes is worth reading--and his latest, Nature Wars, is terrific. Sterba casts a reporter's sharp eye on a little noticed war unfolding under our noses, in our own backyards. We've messed with nature for way too long, and nature is getting even." --Joseph L. Galloway, co-author of We Were Soldiers Once...and Young and We Are Soldiers Still

“Jim Sterba has done a brilliant job explain how it happens that drivers more often than ever run into deer, wild turkeys fly into speeding car windshields and gorge on newly-planted seed corn, and why golf courses are filled with people chasing geese down the fairways with 5 irons in hand.  This informative and beautifully written book gives us the effect of civilization (often well-meaning) on the natural habitat, both flora and fauna.  I loved the book and learned a great deal from it.” – Peter Duchin, musician and author of Ghost of Chance

"If you love animals and trees and other wonders of the natural world, this book will astonish you. Sterba's great gifts are reportorial energy, out-of-the-box thinking, and an easy, relaxed prose style that makes Nature Wars a pleasure to read, even as its counterintuitive discoveries explode on every page." --Daniel Okrent, author of Last Call: The Rise and Fall of Prohibition

“Most Americans now live not in cities but in regrown forests, among at least as many deer as when Columbus landed. Jim Sterba tells us how this came to be and why it isn’t all good. In graceful, clear-eyed prose, he explains why we need to relearn how to cut, cull and kill, to restore a more healthy balance to our environment.” – Paul Steiger, Editor-in-Chief, ProPublica

"Although few of us realize it, America is at a turning point where we must rethink our most fundamental ideas about nature, animals, and how we live. Fortunately we have a wise and witty guide in Jim Sterba, whose Nature Wars is my favorite kind of read -- a book that affectionately recasts much of what we thought we knew about our nation's past and our relationship to the American wild, while at the same time revealing how intimately we ourselves are a part of nature, but in the most surprising and unexpected ways. In Sterba's hands, your everyday notions about the creatures around you -- whether pests, pets, or magnificent beasts -- will turn into entirely new ways of seeing the world."  -Trevor Corson, author of The Secret Life of Lobsters and The Story of Sushi

JIM STERBA has been a foreign correspondent and national affairs reporter for more than four decades for the "Wall Street Journal "and "New" "York Times. "He is the author of "Frankie s Place: A Love Story, "about summers in Maine with his wife, the author Frances FitzGerald."
Loading...
or
Not Currently Available for Direct Purchase