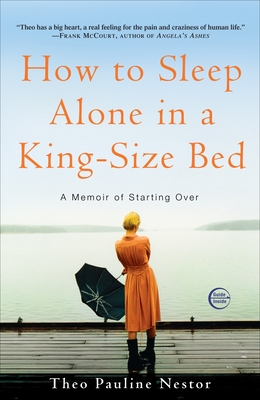 How to Sleep Alone in a King-Size Bed (Paperback)

A Memoir of Starting Over

“I feel like I’ve joined an enormous club, something like the Veterans of Foreign Wars. We are weary with battle fatigue and sometimes even gripped by nostalgia for the good old, bad old days, but our numbers are large,” writes Theo Pauline Nestor in this wry, fiercely honest chronicle of life after divorce.

Less than an hour after confronting her husband over his massive gambling losses, Theo banishes him from their home forever. With two young daughters to support and her life as a stay-at-home mother at an abrupt end, Nestor finds herself slipping from “middle-class grace” as she attends a court-ordered custody class, stumbles through job interviews, and–much to her surprise–falls in love once again. As Theo rebuilds her life and recovers her sense of self, she’s forced to confront her own family’s legacy of divorce. “I’m from a long line of stock market speculators, artists of unmarketable talents, and alcoholics,” writes Nestor. “The higher, harder road is not our road. We move, we divorce, we drink, or we disappear.”

Nestor’s journey takes her deep into her family’s past, to a tiny village in Mexico, where she discovers the truth about how her sister ended up living in a convent there after their parents divorced in the early sixties. What she learns ultimately brings her closer to understanding her own divorce and its impact on her two daughters. “I knew from experience that for children divorce means half the world is constantly eclipsed. When you’re with one parent, the other must always slip out of view,” Nestor writes.

Funny, openhearted, and brave, How to Sleep Alone in a King-Size Bed will speak to anyone who has passed through the halls of divorce court or risked tenderness after loss. It marks the debut of an enchanting, deeply truthful voice.

THEO PAULINE NESTOR teaches writing at the University of Washington. Her essay “The Chicken’s in the Oven, My Husband’s out the Door” was published in the New York Times “Modern Love” column and was the genesis of this book. She lives in Seattle, Washington, with her two daughters.

Praise For How to Sleep Alone in a King-Size Bed: A Memoir of Starting Over…

"Theo has a big heart, a real feeling for the pain and craziness of human life."
—Frank McCourt, author of Angela's Ashes

“Theo Nestor has an uncommon ability to evoke common yet very intense emotions. How to Sleep Alone in a King-Size Bed is smart, astringent, funny, precise, candid, and possesses not an ounce of self-pity.”
—David Shields, author of The Thing About Life Is That One Day You’ll Be Dead

“Heartbreakingly honest, wryly funny, and revelatory . . . [Nestor’s] clever and relatable prose makes her tale endearing and insightful, and she sidesteps the clichés of a woman wounded with bittersweet honesty.”
—LadiesHomeJournal.com

“A divorced mother’s funny, chatty, revealing take on Splitsville–with just enough anguish and sadness to be utterly believable...An unexpected treat here is a vivid portrait of the author's thrice-married, utterly nonmaternal but generous mother...Women going through the pain and turmoil of separation and divorce will appreciate Nestor’s candor and wit. Not another slick how-to, but a comforting reminder that life goes on after the spouse is gone.” —Kirkus
or
Buy Here
Copyright © 2020 American Booksellers Association