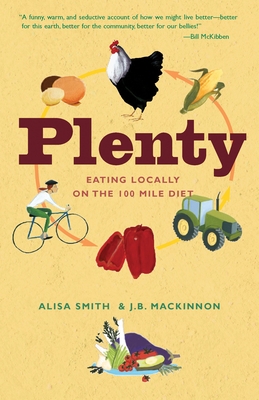 Eating Locally on the 100-Mile Diet: A Cookbook

The remarkable, amusing and inspiring adventures of a Canadian couple who make a year-long attempt to eat foods grown and produced within a 100-mile radius of their apartment.

When Alisa Smith and James MacKinnon learned that the average ingredient in a North American meal travels 1,500 miles from farm to plate, they decided to launch a simple experiment to reconnect with the people and places that produced what they ate. For one year, they would only consume food that came from within a 100-mile radius of their Vancouver apartment. The 100-Mile Diet was born.

The couple’s discoveries sometimes shook their resolve. It would be a year without sugar, Cheerios, olive oil, rice, Pizza Pops, beer, and much, much more. Yet local eating has turned out to be a life lesson in pleasures that are always close at hand. They met the revolutionary farmers and modern-day hunter-gatherers who are changing the way we think about food. They got personal with issues ranging from global economics to biodiversity. They called on the wisdom of grandmothers, and immersed themselves in the seasons. They discovered a host of new flavours, from gooseberry wine to sunchokes to turnip sandwiches, foods that they never would have guessed were on their doorstep.

The 100-Mile Diet struck a deeper chord than anyone could have predicted, attracting media and grassroots interest that spanned the globe. The 100-Mile Diet: A Year of Local Eating tells the full story, from the insights to the kitchen disasters, as the authors transform from megamart shoppers to self-sufficient urban pioneers. The 100-Mile Diet is a pathway home for anybody, anywhere.

Call me naive, but I never knew that flour would be struck from our 100-Mile Diet. Wheat products are just so ubiquitous, “the staff of life,” that I had hazily imagined the stuff must be grown everywhere. But of course: I had never seen a field of wheat anywhere close to Vancouver, and my mental images of late-afternoon light falling on golden fields of grain were all from my childhood on the Canadian prairies. What I was able to find was Anita’s Organic Grain & Flour Mill, about 60 miles up the Fraser River valley. I called, and learned that Anita’s nearest grain suppliers were at least 800 miles away by road. She sounded sorry for me. Would it be a year until I tasted a pie?
—From The 100-Mile Diet

Alisa Smith is a freelance journalist who writes regularly for Reader's Digest.

J.B. MacKinnon is the author of the acclaimed narrative nonfiction book Dead Man in Paradise.


Praise For Plenty: Eating Locally on the 100-Mile Diet: A Cookbook…

This very human and often humorous adventure about two people eating food grown within a short distance of their home is surprising, delightful, and even shocking. If you’ve only talked about eating locally but never given yourself definitions—especially strict ones—to follow, I assure you that your farmers’ market will never again look the same. Nothing you eat will look the same! This inspiring and enlightening book will give you plenty to chew on.”
—Deborah Madison, author of Local Flavors: Cooking and Eating from America’s Farmers’ Markets

“Plenty posits a brilliant, improbable, and finally deliciously noble notion of connecting to the world by striving first to understand what’s underfoot. Beautifully written and lovingly paced, it is at once a lonely and uplifting tale of deep respect between two people, their community, and our earth. Plenty will change your life even if you never could or would try this at home.”
—Danny Meyer, author of Setting the Table

“A funny, warm, and seductive account of how we might live better—better for this earth, better for the community, better for our bellies!”
—Bill McKibben, author of Deep Economy: The Wealth of Communities and the Durable Future

“Succeeds because Smith and MacKinnon don’t give a ____about being normal. Locavorism isn’t normal—that’s the point—and they fly their freak flag with bemused pride, giving themselves over to the mania that infects the newly converted….One imagines Kingsolver at home on her sturdy homestead shaking her head and clucking at those ‘trendy’ kids, but they’re the ones I’d rather have dinner with.”--Martha Bayne, Chicago Reader
or
Not Currently Available for Direct Purchase
Copyright © 2020 American Booksellers Association