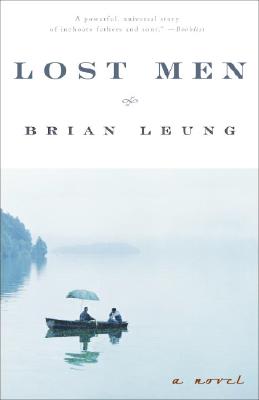 Westen Gray was just eight years old when his Caucasian mother died and his Chinese father, Xin, sent him away to be raised by her relatives. More than twenty years later, after a lifetime of estrangement, Westen receives an invitation from his father to travel with him to China. So it is that two strangers—a father and a son—travel halfway around the world to a land that one of them knows intimately and the other has never seen. The future of their relationship hinges on the trip and on the contents of a sealed letter written by Westen’s mother before her death—a letter that threatens to answer the lifelong question neither of them has dared to ask.

Praise For Lost Men: A Novel…

“Brian Leung has written a compelling and heartfelt story about a father and son, separated for years, and their struggle to reconnect. Written in a spare, elliptical, lyrical voice, Lost Men plumbs complicated questions about family and identity. What can a father offer his son after so much time has passed? How does the past–the world of our fathers, and their fathers–continue to exert its hold over our lives? This is a novel of enormous wisdom and emotional weight.”
—Dan Chaon, author of You Remind Me of Me

“Lost Men is a kind of mystery novel, where the crime is being too proud to be a father, or a son, and the criminals find each other one last time. It's about lives I know but have never seen written down anywhere--Chinese, American, gay, straight. A quietly masterful first novel.”
—Alexander Chee, author of Edinburgh

“Lost Men is an accomplished first novel by the author of World Famous Love Acts (2004), an award-winning book of short stories. Written in the plainest of language, Lost Men is a powerful, universal story of inchoate fathers and sons.”
—Thomas Gaughan (Booklist)

“Grab a box of Kleenex and your comfy mom jeans–you'll be settling in once you pick up Brian Leung's lovely novel. It's an emotional story about a father and son's struggling relationship, where main character Westen Chan is asked by his estranged dad to visit him in China for some much-needed bonding. The beautifully written story is also about Westen coming to grips with his mixed heritage, and his father struggling to get back lost time. Sniff. We'll be fine.”
—Instinct Magazine

BRIAN LEUNG is the author of World Famous Love Acts, winner of the Asian American Literary Award and the Mary McCarthy Prize in Short Fiction. He was born and raised in San Diego County, and currently lives in Louisville, Kentucky, where he is an assistant professor of creative writing at the University of Louisville.