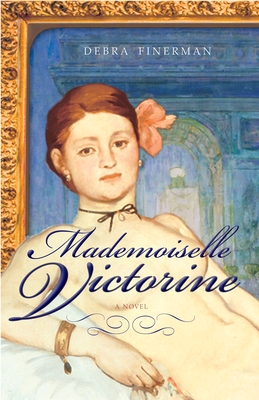 When Victorine Laurent joins the chorus of the grand Paris Opera ballet, she expects to become the mistress of a wealthy man; this is how young women without family survive in the decadent City of Light. Yet when the artist Degas introduces her to Edouard Manet, her life changes dramatically. She agrees to pose for him, and the result is a painting that shocks Paris. Overnight, Victorine becomes the city’s most sought after courtesan.

When she becomes the favorite of the Duke de Lyon, the power behind the shaky government of Emperor Louis-Napoléon, her continued attraction to Manet becomes dangerous for them both. And when an astonishing secret from Victorine’s past comes to light, her carefully constructed world may come crashing down around her.

Mademoiselle Victorine transports readers back to nineteenth-century Paris, a time when art, love, and commerce blended seamlessly together.

Praise For Mademoiselle Victorine: A Novel…

Mademoiselle Victorine plunges the reader into the volatile mix of art and political intrigue in 1860s Paris through the fascinating person of Victorine Laurent, whose rapid, determined rise from dancer to courtesan of kings exposes the lives and passions of her time. Mademoiselle Victorine rides the Parisian whirlwind, taking the reader so deep into the heart of that glittering and dangerous era that putting the book down will not be an option.
- Pamela Aidan, author of An Assembly Such As This

“As vivid, bold, and seductive as a Manet painting…brings to life the tinseled, tawdry art world of Second Empire Paris.
- Eleanor Herman, author of Sex with Kings: 500 Years of Adultery, Power, Rivalry, and Revenge

“Finerman cleverly weaves her touching story, populated with colorful, artistic characters, through a period in the political and artistic history of France that is rich with drama.”
¯Susanne Dunlap, author of Emilie’s Voice and Liszt’s Kiss

Debra Finerman is the author of Mademoiselle Victorine, her first novel. She began her career in journalism, and later attended the prestigious Christie's Education Art History program for Connoisseurship and History of the Art Market, from which she received a New York State Board of Regents accredited graduate degree. She lives in New York.
Loading...
or support indie stores by buying on