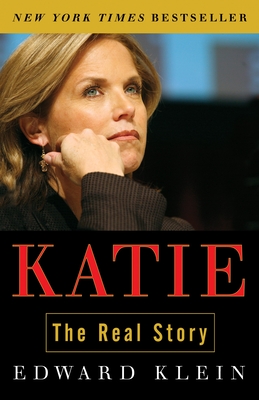 A no-holds-barred account of the rise—and dramatic stumble—of a media icon.

In this probing portrait of a struggling news queen, bestselling author Edward Klein rips away the mask that has hidden the many faces of Katie Couric: the strong, independent woman and the needy wife and lover; the grieving widow famed for her kindness to others and the fiercely competitive diva; the consummate television interviewer and the stumbling network anchor.
Drawing from scores of interviews with people who have never spoken openly about Couric before, Katie: The Real Story absorbingly chronicles Katie’s rise to the top—from her early days at CNN to her nightly spot on CBS. You’ll read about:

Katie and her husband, Jay Monahan: “Jay had come to believe that the only thing that stood between Katie and divorce was her fear of negative publicity.”

Katie’s diva behavior at CBS: “A technical problem left Katie standing without a script. . . . As soon as the red light on the top of the camera went off, she screamed. One of the executives said, ‘Just a minute, Katie; the reason you make $15 million a year is to carry off these little glitches like a pro.’”

Katie and Matt Lauer: “Matt had privately told several executives at NBC that he would quit his job if they signed up Katie for another four years.”

EDWARD KLEIN is the author of six consecutive New York Times bestsellers, including The Truth About Hillary, The Kennedy Curse, and Farewell, Jackie. A former editor in chief of The New York Times Magazine, he is a frequent contributor to Vanity Fair and Parade.
or
Not Currently Available for Direct Purchase
Copyright © 2020 American Booksellers Association