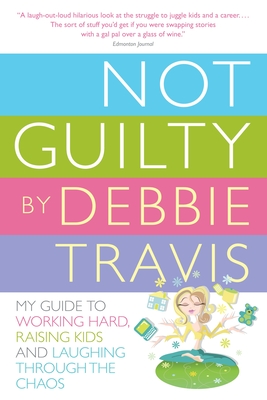 My Guide to Working Hard, Raising Kids and Laughing through the Chaos

"I want this book to read like you are getting together with your best girlfriends over a glass of wine to let loose about life and, most of all, to laugh about it all.” Debbie Travis


Debbie Travis, the beloved home decorating icon, launched her hugely successful career when she had two kids at home under two. When women get a chance to talk with Debbie, yes they want to know what colour to paint their living rooms – but most of all they want to know how the heck she did it!

In Not Guilty, Debbie describes in frank and hilarious detail the rollercoaster ride of raising two feisty little boys at the same time as working with her husband to create two thriving TV production companies and three TV series of her own. Full of laughter and tears, survival strategies and reality checks from other moms who've also had their total meltdown moments, Debbie's book will help you lose the guilt, enjoy the ride and stop being so hard on yourself.

Guess what? Even if you screw up at times, you will survive the emotional ups and downs, the incredible highs and impossible lows – and so will your kids.

Praise For Not Guilty: My Guide to Working Hard, Raising Kids and Laughing through the Chaos…

“One of the neat things about Travis: She says things other people think…. Not Guilty is crammed with sensible advice.”
— The Gazette

“A laugh-out-loud hilarious look at the struggle to juggle kids and a career.”
— Edmonton Journal

Debbie Travis is the author of eight bestselling books and an internationally syndicated newspaper column. She has produced and hosted three highly successfully television series, including Debbie Travis’s The Painted House and Debbie Travis’s Facelift. Her paint and home product line, The Debbie Travis Collection, is sold in Canadian Tire outlets coast to coast. She lives in Montreal with her family.
Loading...
or
Not Currently Available for Direct Purchase