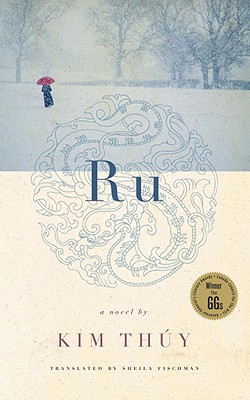 A runaway bestseller in Quebec, with foreign rights sold to 15 countries around the world, Kim Thuy's Governor General's Literary Award-winning Ru is a lullaby for Vietnam and a love letter to a new homeland.
Ru. In Vietnamese it means lullaby; in French it is a small stream, but also signifies a flow - of tears, blood, money. Kim Thuy's Ru is literature at its most crystalline: the flow of a life on the tides of unrest and on to more peaceful waters. In vignettes of exquisite clarity, sharp observation and sly wit, we are carried along on an unforgettable journey from a palatial residence in Saigon to a crowded and muddy Malaysian refugee camp, and onward to a new life in Quebec. There, the young girl feels the embrace of a new community, and revels in the chance to be part of the American Dream. As an adult, the waters become rough again: now a mother of two sons, she must learn to shape her love around the younger boy's autism. Moving seamlessly from past to present, from history to memory and back again, Ru is a book that celebrates life in all its wonder: its moments of beauty and sensuality, brutality and sorrow, comfort and comedy.


"This is an exemplary autobiographical novel. Never is there the slightest hint of narcissism or self-pity. The major events in the fall of Vietnam are painted in delicate strokes, through the daily existence of a woman who has to reinvent herself elsewhere. A tragic journey described in a keen, sensitive and perfectly understated voice."
—Governor General's Literary Award jury citation

“Gloriously, passionately, delicately unique….  A remarkable book; one that has well-earned every note of praise it has received.”
—The Chronicle Journal

“Powerful and engaging.... In short entries that read lyrically and poetically—but also powerfully, pungently, and yet gently, dispassionately—Ru blends politics and history, celebration and violence within a young girl’s imaginative experience…. [I]ts hybrid and enchanted voice conjur[es] a love song out of chaos and pain, singing and rilling its simplicities.”
—Winnipeg Free Press

“In a series of vignettes which extend from wartime Vietnam to the hospitable precincts of Quebec, Kim Thúy writes with equal delicacy and candor about a childhood marked by horrifying brutality, and the pleasures of ordinary peace. A brave and moving book, bringing lucid insight both to the costs of violence, and elusive processes of psychic survival.”
—Eva Hoffman, author of Lost in Translation

KIM THuY has worked as a seamstress, interpreter, lawyer and restaurant owner. She currently lives in Montreal where she devotes herself to writing.

Sheila Fischman is the award-winning translator of some 150 contemporary novels from Quebec. In 2008 she was awarded the Molson Prize in the Arts. She is a Member of the Order of Canada and a "chevalier" de l'Ordre national du Quebec. She lives in Montreal.
Loading...
or
Not Currently Available for Direct Purchase