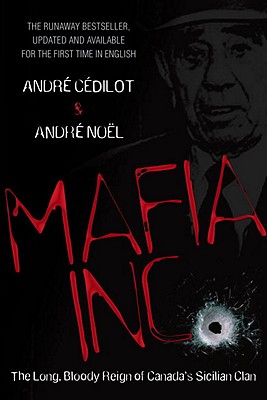 The runaway bestselling exposé about Canada's most infamous mafia family is finally available in English, updated to include shocking events and revelations that followed its newsmaking publication in Québec.

Queens, New York, 1981. When Alphonse "Sonny Red" Indelicato and two others are found dead in a vacant lot, police fail to solve their murders. For their killer and his Montréal family, their deaths mark the beginning of an epic rise to criminal power that will last over thirty years. But in the mid-2000s, having escaped justice for decades, father and son Nicolo and Vito Rizzuto are finally arrested and convicted, one in Montréal and one in the United States. Meanwhile, deep inside the heart of their family, struck hard by a series of carefully plotted executions, the epic continues.

Updated and available for the first time in English, Mafia Inc.--a major bestseller even before the 2010 assassination of Nicolo Rizzuto--reveals how the Rizzuto clan built their Canadian empire through force and corruption, alliances and compromises, and turned it into one of the most powerful criminal organizations in North America. Relying on extensive court documents, police sources and sources in the family's home village in Sicily, Montréal journalists André Cédilot and André Noël reconstruct the history of the Rizzuto clan, and expose how its business extends throughout Canada and the world, shaping the criminal underworld, influencing politicians and bending the will of business leaders to their own self-satisfying ends.

ANDRÉ CÉDILOT was a justice reporter at Montréal's La Presse for 35 years, with a special interest in Italian mafia and organized crime. Often interviewed as an authority on these subjects, he regularly acts as a consultant for documentaries and television series.

ANDRÉ NOËL has been an investigative reporter at La Presse for over 20 years. His work has won him several prestigious awards in Québec and across Canada. He often writes with André Cédilot about the mafia. In the course of his career, he has published six books on a wide range of subjects.

“If you read only one book this year, it must be Mafia Inc. It reads like a thriller because it is one. . . . You’ll understand . . . why some Mafia members target the highest of public offices, not just in municipal government but at the provincial and federal levels too. . . . To understand how this powder keg came to be, you must read Mafia Inc.”
—Le Devoir

“Mafia Inc. is a book that will be read for the next twenty years. Now that it has laid out for us how the Mafia insinuates itself into the legitimate economy and certain political channels . . . it is all suddenly visible to the naked eye.”
—La Presse
or
Not Currently Available for Direct Purchase
Copyright © 2020 American Booksellers Association