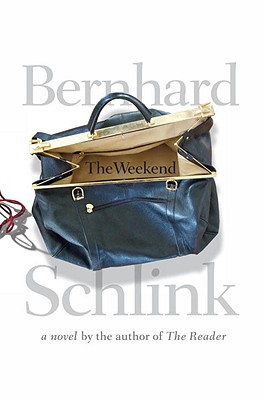 Old friends and lovers reunite for a weekend in a secluded country home after spending decades apart.

They excavate old memories and pass clandestine judgments on the wildly divergent paths they’ve taken since their youth. But this isn’t just any reunion, and their conversations about the old days aren’t your typical reminiscences: After twenty-four years, Jörg, a convicted murderer and terrorist, has been released from prison. The announcement of his pardon will send shock waves through the country, but before the announcement, his friends—some of whom were Baader-Meinhof sympathizers or those who clung to them—gather for his first weekend of freedom. They have been summoned by Jörg’s devoted sister, Christiane, whose concern for her brother’s safety is matched only by the unrelenting zeal of Marko, a young man intent on having Jörg continue to fight for the cause.

Bernhard Schlink is at his finest as The Weekend unfolds. Passions are pitted against pragmatism, ideas against actions, and hopes against heartbreaking realities.

Bernhard Schlink is the author of the internationally best-selling novel "The Reader," which was an Oprah's Book Club selection. He divides his time between Berlin and New York.

Praise For The Weekend…

Praise for The Weekend
“Schlink avoids the easy route of condemnation and salvation . . . The book’s real strength is the finely wrought dynamic among the characters, whose relationships and histories are fraught with a powerful sense of tension and possibly untoward potential.”
—Publishers Weekly

Praise for The Reader
“Arresting, philosophically elegant, morally complex . . . Schlink tells this story with marvelous directness and simplicity, his writing stripped bare of any of the standard gimmicks of dramatization.”
—The New York Times

“[A] beautiful, disturbing, and finally morally devastating novel. From the first page, The Reader ensnares both heart and mind.”
—Los Angeles Times

Praise for Homecoming
“A beguilingly oblique novel . . . Despite its intricate, mazelike progression, Homecoming has surprising narrative thrust.”
—The Economist

“Sensitive and disturbing . . . The reader’s mind opens to the story like a plant unfurling its leaves to the sun.”
—The New York Times Book Review

Praise for Flights of Love
“An outstanding collection.”
—The Wall Street Journal