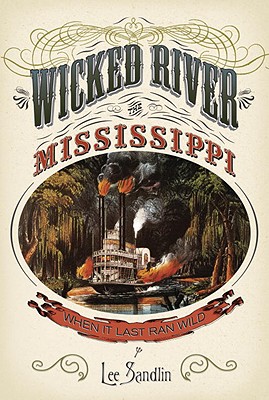 The Mississippi When It Last Ran Wild

From award-winning journalist Lee Sandlin comes a riveting look at one of the most colorful, dangerous, and peculiar places in America's historical landscape: the strange, wonderful, and mysterious Mississippi River of the nineteenth century.
Beginning in the early 1800s and climaxing with the siege of Vicksburg in 1863, Wicked River takes us back to a time before the Mississippi was dredged into a shipping channel, and before Mark Twain romanticized it into myth. Drawing on an array of suspenseful and bizarre firsthand accounts, Sandlin brings to life a place where river pirates brushed elbows with future presidents and religious visionaries shared passage with thieves a world unto itself where, every night, near the levees of the big river towns, hundreds of boats gathered to form dusk-to-dawn cities dedicated to music, drinking, and gambling. Here is a minute-by-minute account of Natchez being flattened by a tornado; the St. Louis harbor being crushed by a massive ice floe; hidden, nefarious celebrations of Mardi Gras; and the sinking of the Sultana, the worst naval disaster in American history. Here, too, is the Mississippi itself: gorgeous, perilous, and unpredictable, lifeblood to the communities that rose and fell along its banks.
An exuberant work of Americana at once history, culture, and geography Wicked River is a grand epic that portrays a forgotten society on the edge of revolutionary change.


Praise For Wicked River: The Mississippi When It Last Ran Wild…

"In this lush, exuberant, action-packed and history-drenched book, Sandlin has brought the river back home again. . . . A vivid torrent of facts and passions, in an inspired agitation of water and words. . . . Wicked River is the best kind of history book. It is organized around people and their fates, not wars and dates and treaty signings. It artfully separates reality from fables, but it recognizes that fables have a story to tell, too, that our tall tales and our songs and our exaggerations and our mythologies can be as revelatory as topographical maps and temperature charts."
—Chicago Tribune

"Gripping stuff. . . . Appreciators of what Greil Marcus calls the Old, Weird America will savor Wicked River. Its many ghastly scenes, vividly rendered by Mr. Sandlin, started showing up in my dreams. . . . I was surprised, upon finishing Wicked River, to read that this confident and swift-moving book is the author's first. It makes one eager for the next."-—John Jeremiah Sullivan, The Wall Street Journal

"A biography of the river in its pre-Twain period."
—The Washington Post

"Entertaining. . . . Chicago essayist and journalist Lee Sandlin tells tales about the Mississippi in the days when the river and the people who floated on it or lived along it were wild and untamed in the extreme. . . . Sandlin has done an impressive amount of research. For all that, his prose manages to avoid the snags and shoals of academic English. . . . A lot of fun to read."
—St. Louis Post-Dispatch

"Remarkable. . . . Told with the same verve and affinity for a good yarn that encomia to the river tend to inspire, Wicked River looks at life along the Mississippi in the 19th century, before Twain had us thinking it was all Americana adventures. . . . Sandlin may singlehandedly destroy the view that the Midwest is a mellow place."
—Time Out Chicago

"Sumptuous writing and fascinating tales of the days when life on the Mississippi was rough and wild. . . . Sandlin transports readers back to a renegade time on the Mississippi, a rollicking ride full of marauders, floating brothels and rough characters spit straight from the pen of Twain himself. Sandlin's own prose style is a fluvial joy."
—Minneapolis Star Tribune

"A gripping look back at the forgotten history of the river that made America."
—The Daily Beast

"Sandlin pulls no punches . . . it's almost as if he decided Twain was wrong and we need to find out the truth. He tells of pirates, drownings and slavery even uglier than most history books will tell us, of people who fell off boats and had no way of being rescued in a wilderness. . . . if you love the river and its history, read it. It's fun."
—Rochester (MN) Post-Bulletin

"A gripping book that plunges you into a rich dark stretch of visceral history. I read it in two sittings and got up shaken."
—Garrison Keillor

"Raucous, fascinating and fun. . . . [Lee] Sandlin debuts with a rollicking history of the Mississippi Valley before commerce and technology tamed it. . . . [He] seems to have adopted some of Twain’s technique in Life On the Mississippi—i.e., disappearing for pages into long narratives/legends/rumors associated with the valley and its denizens. . . . [He] provides some John McPhee–like detail about geology and riverine history, and also examines the human history of the region. . . . Apart from his generous offering of surprising facts, it’s obvious that Sandlin loves the lore of the river, its narratives, legends and lies. . . . Readers will delight in stories about Annie Christmas (who wrote tales about prostitutes), Marie Laveau (the Voodoo Queen), the Crow’s Nest pirates and John Murrell and his so-called “Mystic Clan. . . .Gorgeous. ”
—Kirkus

"Wicked River almost makes you feel guilty for enjoying an education so much. I learned things at every S-curve, neck deep in a fine, fine story. I lived a stone's throw from that river, and though I knew it flowed through eons of meanness and sadness and ribaldry, I didn't know it was this twisted. "
—Rick Bragg, author of The Prince of Frogtown

"Geographically, culturally, and metaphorically, the Mississippi River has been at the center of American reality and imagination for 400 years. In Wicked River, Lee Sandlin has lived up to his epic subject, taking us into overlooked, if not forgotten, epochs of history and folklore. Through labor and erudition he weaves the incredibly complicated strands of a story that seems too big to contemplate into a coherent tale that is surprising and entertaining on every page. He's made the river his own, and extends it as a welcome gift to the reader."
—Anthony Walton, author of Mississippi: An American Journey

"What a wickedly wild ride of a read! I loved this book! It may be nonfiction, but Sandlin tells his stories with a narrative drive that any novelist would envy. The events and characters from the early days along the Mississippi, which he so evocatively recreates, are among the most fascinating you’ll ever encounter anywhere. Honest to god, reading history has never been more fun!".
—William Kent Krueger, author of Heaven's Keep

“One of the best book’s ever written about the Mississippi River. Each page rounds a new bend full of delirious missionaries, hell-bent-for-speed steamboat captains, and gaudy traders in ‘fancy girl’ slave prostitutes. You won’t put it down till you’ve read every steamy, malarial, fascinating page.”
—Mike Tidwell, author of Bayou Farewell

“Today we think of the Mississippi River as an elder statesman of the American landscape, but for most of the nineteenth century it was pure frontier: unruly, unregulated, and dangerous. Wicked River perfectly captures the great river's secret history, overflowing with wonderfully chosen and impeccably delivered character sketches, set pieces, and side trips.”
—Scott W. Berg, author of Grand Avenues

“In a narrative worthy of Mark Twain, Lee Sandlin tells of the Mississippi River when it was not only wild but wicked, home to sharpers and humbuggers, jackanapes, tub thumpers, and naked revelers.  This is a grand tale of America’s mightiest river and the larger-than-life men and women who rode its waves into history.”
—Sandra Dallas, author of Whiter Than Snow and Prayers for Sale

“A fascinating book, rich in detail and lore, the kind of strange object one wants to curl up with for long periods of time and gaze into the past we know much less well than we imagine. Wicked River is bound to cause a stir among readers who always want to know a little more about some place or some thing than the usual sources allow. Reading it is going to school again, in the best possible way. An entrance into a world so magical and unlikely that every page is a new episode full of real swashbuckling, nasty critters (human), and the roiling history of the big bad river.”
—Frederick Barthelme, author of Waveland

"Sandlin pulls no punches . . . it's almost as if he decided Twain was wrong and we need to find out the truth. He tells of pirates, drownings and slavery even uglier than most history books will tell us, of people who fell off boats and had no way of being rescued in a wilderness. . . . if you love the river and its history, read it. It's fun."
—Rochester (MN) Post-Bulletin

Lee Sandlin is the author ofWicked River, Storm Kings, and TheDistancers. He was also an award-winning journalist, essayist, and book reviewer forThe Wall Street Journal. Born in Wildwood, Illinois, he grew up in the suburbs of Chicago. He died in 2014."
Loading...
or
Not Currently Available for Direct Purchase