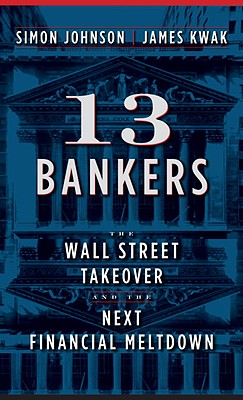 Even after the ruinous financial crisis of 2008, America is still beset by the depredations of an oligarchy that is now bigger, more profitable, and more resistant to regulation than ever. Anchored by six megabanks Bank of America, JPMorgan Chase, Citigroup, Wells Fargo, Goldman Sachs, and Morgan Stanley which together control assets amounting, astonishingly, to more than 60 percent of the country's gross domestic product, these financial institutions (now more emphatically too big to fail ) continue to hold the global economy hostage, threatening yet another financial meltdown with their excessive risk-taking and toxic business as usual practices. How did this come to be and what is to be done? These are the central concerns of 13 Bankers, a brilliant, historically informed account of our troubled political economy.
In 13 Bankers, Simon Johnson one of the most prominent and frequently cited economists in America (former chief economist of the International Monetary Fund, Professor of Entrepreneurship at MIT, and author of the controversial The Quiet Coup in The Atlantic) and James Kwak give a wide-ranging, meticulous, and bracing account of recent U.S. financial history within the context of previous showdowns between American democracy and Big Finance: from Thomas Jefferson to Andrew Jackson, from Theodore Roosevelt to Franklin Delano Roosevelt. They convincingly show why our future is imperiled by the ideology of finance (finance is good, unregulated finance is better, unfettered finance run amok is best) and by Wall Street's political control of government policy pertaining to it.
As the authors insist, the choice that America faces is stark: whether Washington will accede to the vested interests of an unbridled financial sector that runs up profits in good years and dumps its losses on taxpayers in lean years, or reform through stringent regulation the banking system as first and foremost an engine of economic growth. To restore health and balance to our economy, Johnson and Kwak make a radical yet feasible and focused proposal: reconfigure the megabanks to be small enough to fail.
Lucid, authoritative, crucial for its timeliness, 13 Bankers is certain to be one of the most discussed and debated books of 2010.


Praise For 13 Bankers: The Wall Street Takeover and the Next Financial Meltdown…

"How Modern Wall Street—the most powerful and concentrated financial sector in the country’s history—both created the financial crisis and ensured a bail-out for its own benefit."
—The Economist

"Mr. Johnson offers an enticing vision of a Wall Street confined, its potency limited to put-downs and head-shaking: a Wall Street where right-sized banking is a do-gooder word for a safer, saner system that has learned from its mistakes."
—David Weidner, Wall Street Journal

“The best explanation yet for how the smart guys on Wall Street led us to the brink of collapse. In the process, Johnson and Kwak demystify our financial system, stripping it down to expose the ruthless power grab that lies at its center.”
— Elizabeth Warren, Leo Gottlieb Professor of Law, Harvard Law School; and Chair, TARP Congressional Oversight Panel

“Too many discussions of the Great Recession present it as a purely economic phenomenon – the result of excessive leverage or errors of monetary policy or algorithms run mad. Simon Johnson was the first to point out that this was and is a crisis of political economy. His and James Kwak's analysis of the unholy inter-twining of Washington and Wall Street – a cross between the gilded age and a banana republic – is essential reading.”
— Niall Ferguson, Professor of History, Harvard University; Professor, Harvard Business School; and author of The Ascent of Money

“If the wads of money you’re stuffed into your mattress for safekeeping don’t keep you up at night, 13 Bankers will. A disturbing and painstakingly researched account of how the banks wrenched control of government and society out of our hands – and what we can do to seize it back.”
— Bill Moyers

“Essential reading for anyone who wants to understand what comes next for the world economy. Dangerous and reckless elements of our financial sector have become too powerful and must be reined in. If this problem is not addressed there is serious trouble in all our futures.”
— Nouriel Roubini, Professor of Economics, Leonard N. Stern School of Business, New York University; and Chairman of Roubini Global Economics

“Beautifully written and powerful. Ties the current financial crisis to a cycle of politics as old as the Republic, and to a pathology in our politics that is as profound as any that our Republic has faced. Required reading for the president, and for anyone else who cares for this Republic.”
— Lawrence Lessig, Director of the Edmond J. Safra Foundation for Ethics, Harvard University

“Simon Johnson makes it clear that our financial system is broken, and that Wall Street and Washington broke it. Sadly, he also makes it clear that they want to keep it that way. His gripping book explains how the economic crisis developed and what must be done to create a fair system, one that will benefit all Americans rather than just those who are the members of the club.”
— Herbert A. Allen III, President and Chief Executive Officer, Allen & Company

“The U.S. financial sector is incredibly bloated and a drain on the productive economy. It uses its enormous economic power to buy politicians and policies that favor its interests and perpetuates its power. This is the main argument of Simon Johnson’s new book. The views expressed are especially striking because Johnson is the former chief economist at the IMF. He has had decades of experience dealing with financial crises. This often required working with corrupt governments dominated by powerful financial interests. It is striking to see Johnson putting the U.S. government in this category.”
— Dean Baker, Co-Founder and Co-Director of the Center for Economic and Policy Research

“Johnson and Kwak embed the financial crisis in a sophisticated analysis of US economic history, explain its evolution with unusual clarity and propose policy reforms to prevent its ever happening again that are both straight forward and compelling.”
— C. Fred Bergsten, Director, Peterson Institute for International Economics

“13 Bankers is surely the only book about the financial crisis 2007-09 that begins with a quote from The Great Gatsby. But, the analogy is appropriate. Johnson and Kwak not only tell us in great detail how the crisis happened and what we must do to avoid another crisis, but they see the deeper political and cultural context that permitted carelessness and excess nearly to break the financial system and plunge us into a depression.”
— Bill Bradley, former United States Senator

“13 Bankers is a chilling tale of the dangers of concentrated economic, intellectual, and political power. Even if you do not agree with everything the authors have to say, this book makes it clear why ending “too big to fail” and reforming the institutions that perpetuate it – particularly the Federal Reserve – are essential for our nation’s future economic prosperity and, more fundamentally, our democratic system.”
— U.S. Senator Jim Bunning

“This is a timely, informative and important book. You may not agree with all the analysis but the issues so clearly discussed are real, current and vitally important. Financial industry reform must be undertaken soon; inaction, as the authors convincingly argue, would have dangerous consequences. This book explains it all and it’s great reading.”
— Lawrence K. Fish, former Chairman and Chief Executive Officer, Citizens Financial Group

“What Simon Johnson is telling us is that we are subjecting ourselves to rule by a self-perpetuating banking oligarchy. Which leaves two questions: Are we listening? And if we are, then what are we going to do about it?”
— Congressman Alan Grayson

“13 Bankers is a tour de force. For those many Americans who believe they have never received an adequate explanation about why the United States economy crashed in 2008, who is to blame, where their tax dollars went, and why the villains have thrived while everyone else has suffered, read this book or be prepared for history to repeat itself soon.”
— Michael Greenberger, Professor of Law, University of Maryland School of Law School; Former Director, Trading and Markets Division, Commodity Futures Trading Commission

“Prescient and powerful, 13 Bankers provides a battle plan for the fight to ensure that America’s ‘too big to fail’ megabanks will no longer be able to hold the global economy hostage while accumulating record profits, doling out obscene bonuses, and spending millions of dollars on lobbying to gut financial reform. Johnson and Kwak demonstrate that what is good for Wall Street is decidedly not good for Main Street, and present a bracing, and at times frightening, analysis of how Big Finance has undermined our political system. Most importantly, they offer specific proposals for turning things around. Our future depends on fixing our financial system; 13 Bankers shows us how.”
— Arianna Huffington

“13 Bankers is an absolutely brilliant and spellbinding forensic analysis of Main Street’s economic murder at the hands of financial behemoths who gambled recklessly with the taxpayers' chips while paying Washington to look the other way. From Jefferson and Jackson to South Korea and Russia, the book traverses time and space in documenting that banks that are ‘too big to fail’ are far too big to be preserved. The message is clear: bust the financial trusts and do it now!”
— Laurence J. Kotlikoff, Professor of Economics, Boston University, and author of Jimmy Stewart Is Dead.

“13 Bankers explains our financial crisis in the context of the recent experience of other nations and our own history. Our financial crisis fits a tediously familiar pattern of unrestrained, vulgar excess followed by collapse. We should heed the lesson that Simon Johnson and James Kwak draw: the continued concentration of economic and political power makes future economic crises inevitable and undermines democracy.”
— Congressman Brad Miller

“As Simon Johnson makes lucidly and compellingly clear, the problem with Wall Street leads directly to the core problem of our democracy. American politics now feeds on money, and Wall Street is where the money is. Unless we separate money from politics, we'll never be safe from another financial meltdown. In fact, we'll never really be safe. Read this fine book and get to work.”
— Robert B. Reich, Professor of Public Policy, University of California at Berkeley, Former U.S. Secretary of Labor

“Over the last 50 years, the FAA, the airline manufacturers, and the airlines worked together to make a highly complex air travel system more efficient and much safer. If you’ve ever wondered why, in contrast, our financial regulators and banks made our financial system less efficient and much more dangerous, you should read this book.”
— Paul Romer, Senior Fellow, Center for International Development, and Institute for Economic Policy Research, Stanford University

“Johnson and Kwak deftly survey the roots and aftermath of the financial panic of 2007-2009, daring to ask whether institutions deemed "too big to fail" are merely a symptom of a Wall Street that is "too well-connected to fail." Now, as policymakers, we find ourselves at a crossroads. Will we perpetuate this phenomenon or will we finally stand up to the barons of high finance? According to the authors, it is not too late to redraw the lines of regulation to protect taxpayers, investors, borrowers, and ultimately the financial system from itself. We in Congress would be wise to take their advice.”
— Congressman Brad Sherman

Simon Johnson is Ronald A. Kurtz Professor of Entrepreneurship at MIT s Sloan School of Management and a senior fellow of the Peterson Institute for International Economics. He is coauthor, with James Kwak, of The Baseline Scenario, a leading economic blog, described by Paul Krugman as a must-read and by Bill Moyers as one of the most informative news sites in the blogosphere. James Kwak has had a successful business career as a consultant for McKinsey & Company and as a software entrepreneur."