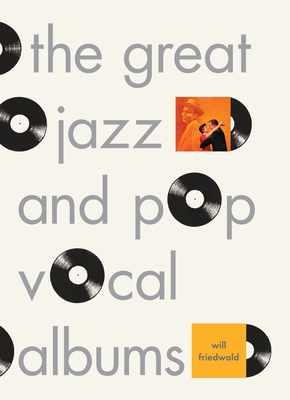 The author of the magisterial A Biographical Guide to the Great Jazz and Pop Singers now approaches the great singers and their greatest work in an innovative and revelatory way: through considering their finest albums, which is the format in which this music was most resonantly organized and presented to its public from the 1940s until the very recent decline of the CD. It is through their albums that Ella Fitzgerald, Frank Sinatra, Peggy Lee, Sarah Vaughan, Nat King Cole, Judy Garland, and the rest of the glorious honor roll of jazz and pop singers have been most tellingly and lastingly appreciated, and the history of the album itself, as Will Friedwald sketches it, can now be seen as a crucial part of musical history. We come to understand that, at their finest, albums have not been mere collections of individual songs strung together arbitrarily but organic phenomena in their own right. A Sinatra album, a Fitzgerald album, was planned and structured to show these artists at their best, at a specific moment in their artistic careers.

Yet the albums Friedwald has chosen to anatomize go about their work in a variety of ways. There are studio and solo albums: Lee’s Black Coffee, June Christy’s Something Cool, Cassandra Wilson’s Belly of the Sun. There are brilliant collaborations: famous ones—Tony Bennett and Bill Evans, Louis Armstrong and Oscar Peterson—and wonderful surprises like Doris Day and Robert Goulet singing Annie Get Your Gun. There are theme albums—Dinah Washington singing Fats Waller, Maxine Sullivan singing Andy Razaf, Margaret Whiting singing Jerome Kern, Barb Jungr singing Bob Dylan, and the sublime Jo Stafford singing American and Scottish folk songs. There are also stunning concert albums like Ella in Berlin, Sarah in Japan, Lena at the Waldorf, and, of course, Judy at Carnegie Hall. All the greats are on hand, from Kay Starr and Carmen McRae to Jimmy Scott and Della Reese (Della Della Cha Cha Cha). And, from out of left field, the astounding God Bless Tiny Tim.

Each of the fifty-seven albums discussed here captures the artist at a high point, if not at the expected moment, of her or his career. The individual cuts are evaluated, the sequencing explicated, the songs and songwriters heralded; anecdotes abound of how songs were born and how artists and producers collaborated. And in appraising each album, Friedwald balances his own opinions with those of musicians, listeners, and critics. A monumental achievement, The Great Jazz and Pop Vocal Albums is an essential book for lovers of American jazz and popular music.

WILL FRIEDWALD has written about music for The Wall Street Journal and was the jazz (and cabaret) critic for The New York Sun. He is the author of nine books, including A Biographical Guide to the Great Jazz and Pop Singers; Stardust Melodies: The Biography of Twelve of America's Most Popular Songs; Jazz Singing: America's Great Voices from Bessie Smith to Bebop and Beyond; Sinatra! The Song Is You; and Tony Bennett: The Good Life (with Tony Bennett). He has written liner notes for nearly five hundred compact discs, for which he has received eight Grammy nominations. He has also written for Vanity Fair, The Village Voice, Entertainment Weekly, American Heritage, and The New York Times, among other publications.

Praise For The Great Jazz and Pop Vocal Albums…

"Will Friedwald's thoughtful analysis and insight into the background and nuances of the music by the artists featured in his book make each song a more enriching experience for casual listeners and music aficionados alike. I'm honored to be included and grateful to Will for keeping the American Songbook and jazz classics relevant for generations to come."
—Doris Day

“Absolutely indispensable . . . Friedwald . . . brings his rare ability to write about singing in a way that effectively bridges impressionistic interpretation with musical analysis to the task of ‘reading’ an album the way a literary critic reads a poem. The result is never less than perceptive and often stop-in-your tracks brilliant. . . . A magnificent achievement.”
—Bill Ott, Booklist (starred review)

"With verve and an infectious love of music, jazz critic Friedwald tells the stories of fifty-seven jazz and pop albums that have become benchmarks by which subsequent records have been measured. . . . His passionate description of each album in this indispensable guide will drive readers to listen to the albums once again, or for the first time."
—Publishers Weekly, starred review
or support indie stores by buying on
Copyright © 2020 American Booksellers Association