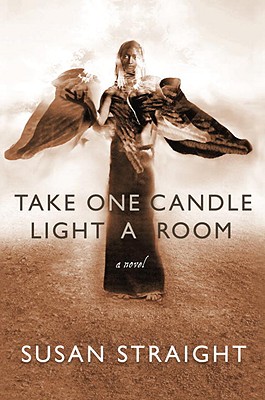 Take One Candle Light a Room

From the author of A Million Nightingales (“a writer of exceptional gifts and grace”—Joyce Carol Oates) comes a luminous new novel about the forces that tear families apart and the ties that bind them together.

Fantine Antoine is a travel writer, a profession that keeps her happily away from her Southern California home. When she returns to mark the fifth anniversary of the murder of her closest childhood friend, Glorette, she finds herself pulled into the tumultuous life of Glorette’s twenty-two-year-old son—and Fantine’s godson—Victor. After getting involved in a shooting, Victor has fled to New Orleans. Together with her father, Fantine follows Victor, determined to help him avoid the criminal future that he suddenly seems destined for.

Fantine’s own fate will be altered on this journey as well: her father will reveal the wrenching secrets of his past, and she will be compelled to question the most essential choices she’s made in her life. As they cross from California to the heart of Louisiana, all three characters will come face-to-face with the issues of race that beset them: Fantine, whose light skin has allowed her a kind of invisibility; her father, who grew up in the Jim Crow South and has tried to guard his family against that world; and Victor, whose fall into violence mirrors the path of so many other young black men. For Fantine, finding Victor could offer them both a way to face the past and decide between different futures.

Powerful and moving, Take One Candle Light a Room illuminates the intricacies of human connection and the ways in which we find a place for ourselves within our families and the world.

Praise For Take One Candle Light a Room: A novel…

Praise for Take One Candle Light a Room


"Layering the rich particulars of African American life into a classic tale of individual desires straining against collective constraints, Straight adds another complex, compassionate achievement to her distinguished body of work."
—The Washington Post

"Using curt slang and patois, Straight nails the way poverty and degradation can make the members of a group of young men draw closer—and make them suspicious of even well-meaning outsiders."
—The New York Times Book Review

"You've never seen writing like this about this part of Southern California—the parking lots and backyards, the dusty foliage no one bothers to name. Not only does she hope to illuminate the dusty corners, she wants to put this part of the country on the national literary map. Straight writes about the Paloma dump the way F. Scott Fitzgerald wrote about Long Island . . . We need writers like Straight to capture the sound of each new generation into perpetuity."
—Los Angeles Times

“From National Book Award finalist Straight, a searing, ultimately redemptive novel about America’s legacy of racial violence and a woman’s struggle to forge her own identity . . . Deeply rooted in the African-American experience, yet filled with insights that resonate for anyone seeking to make a better life without disowning the past. Straight writes about the thorny subject of race with sensitivity and nuance.”
—Kirkus (starred)

"A vivid portrait of a mixed-race family, proud yet haunted by the vagaries of the past, and of a woman and a boy trying to bridge two worlds. This is also a novel about the importance of words. Straight beautifully blends the rhythmic cadence of the Creole patois with the down-and-dirty slang of the street. With its compelling story, menacing atmosphere, and exquisite use of language, this book has something to intrigue most readers."
—Library Journal

“There is no voice like Susan Straight’s . . . [She is] a major writer who has created her own world and her own place in contemporary American literature.”
—Newsday

“One of America’s gutsiest writers . . . A polyglot with an astonishing ear for how people really talk in places we hardly remember they are living.”
—Baltimore Sun

“A lyrical and intelligent storyteller, [Straight] burns clean the forbidding barriers of culture and race that blind people to one another.”
—People

“Straight is both a novelist and a mother, and has to be numbered among the Mothers of Invention who count for so much in our literature, writers such as [Louise] Erdrich and Jane Smiley, Barbara Kingsolver and Dorothy Allison.”
—The Boston Globe

“Lush passages drip like Spanish moss from Straight’s prose . . . [She] writes with nuance and insinuating grace.”
—The Seattle Times

Susan Straight is the author of six novels, including "A Million Nightingales" and the National Book Award finalist "Highwire Moon." She has written for "The New York Times Magazine, "the" Los Angeles Times, Harper's Magazine, " and NPR's "All Things Considered." Her short stories have won an Edgar Award and an O. Henry Award. She teaches at the University of California, Riverside.