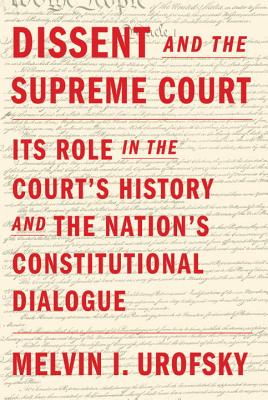 Dissent and the Supreme Court (Hardcover)

Its Role in the Court's History and the Nation's Constitutional Dialogue

By Melvin I. Urofsky

From the admired judicial authority, author of Louis D. Brandeis (“Remarkable”—Anthony Lewis, The New York Review of Books; “Monumental”—Alan M. Dershowitz, The New York Times Book Review), Division and Discord, and Supreme Decisions—Melvin Urofsky’s major new book looks at the role of dissent in the Supreme Court and the meaning of the Constitution through the greatest and longest lasting public-policy debate in the country’s history, among members of the Supreme Court, between the Court and the other branches of government, and between the Court and the people of the United States.

Urofsky writes of the necessity of constitutional dialogue as one of the ways in which we as a people reinvent and reinvigorate our democratic society. In Dissent and the Supreme Court, he explores the great dissents throughout the Court’s 225-year history. He discusses in detail the role the Supreme Court has played in helping to define what the Constitution means, how the Court’s majority opinions have not always been right, and how the dissenters, by positing alternative interpretations, have initiated a critical dialogue about what a particular decision should mean. This dialogue is sometimes resolved quickly; other times it may take decades before the Court adjusts its position. Louis Brandeis’s dissenting opinion about wiretapping became the position of the Court four decades after it was written. The Court took six decades to adopt the dissenting opinion of the first Justice John Harlan in Plessy v. Ferguson (1896)—that segregation on the basis of race violated the Constitution—in Brown v. Board of Education (1954).

Urofsky shows that the practice of dissent grew slowly but steadily and that in the nineteenth century dissents became more frequent. In the (in)famous case of Dred Scott v. Sanford (1857), Chief Justice Roger Taney’s opinion upheld slavery, declaring that blacks could never be citizens. The justice received intense condemnations from several of his colleagues, but it took a civil war and three constitutional amendments before the dissenting view prevailed and Dred Scott was overturned.

Urofsky looks as well at the many aspects of American constitutional life that were affected by the Earl Warren Court—free speech, race, judicial appointment, and rights of the accused—and shows how few of these decisions were unanimous, and how the dissents in the earlier cases molded the results of later decisions; how with Roe v. Wade—the Dred Scott of the modern era—dissent fashioned subsequent decisions, and how, in the Court, a dialogue that began with the dissents in Roe has shaped every decision since.

Urofsky writes of the rise of conservatism and discusses how the resulting appointments of more conservative jurists to the bench put the last of the Warren liberals—William Brennan and Thurgood Marshall—in increasingly beleaguered positions, and in the minority. He discusses the present age of incivility, in which reasoned dialogue seems less and less possible. Yet within the Marble Palace, the members of the Supreme Court continue to hear arguments, vote, and draft majority opinions, while the minority continues to “respectfully dissent.” The Framers understood that if a constitution doesn’t grow and adapt, it atrophies and dies, and if it does, so does the democratic society it has supported. Dissent—on the Court and off, Urofsky argues—has been a crucial ingredient in keeping the Constitution alive and must continue to be so.

MELVIN I. UROFSKY is a professor emeritus of history at Virginia Commonwealth University and was the chair of its history department. He is the editor (with David W. Levy) of the five-volume collection of Louis Brandeis’s letters, as well as the author of American Zionism from Herzl to the Holocaust and Louis D. Brandeis. He lives in Gaithersburg, Maryland.

Praise For Dissent and the Supreme Court: Its Role in the Court's History and the Nation's Constitutional Dialogue…

Acclaim for Mel Urofsky’s
DISSENT AND THE SUPREME COURT

“A wide-ranging and intriguing study of how the justices of the United States Supreme Court have dissented from majority opinions and how we should think about them . . . Invaluable . . . Creative and well-researched.”
—Linda Przybyszewski, American Journal of Legal History

“Brilliant . . . Urofsky’s expertise as a historian and student of the Supreme Court brings depth and richness to his treatment of this fascinating subject . . . A good read for those who find the workings of the Court of special interest.”
—Ronald Goldfarb, Washington Lawyer

“One of the nation’s great legal historians . . . masterfully recounts the history of dissent on the court, from its early days, when dissents were rare and strongly discouraged, to the modern era, when they often outnumbered majority opinions.
—David Cole, The Washington Post

“Incisive . . . Dissent and the Supreme Court traces the dissent’s noble history and shows how many of the most important protections of American society – free speech, racial equality, individual liberty – began their lives as dissents pushing back against a court that was not yet ready to hear them.”
—Joshua J. Friedman, Columbia Magazine

“Ambitious . . . Urofsky’s extraordinarily careful analysis and sense of historical depth make ‘Dissent and the Supreme Court’ an important book, one that explores some of the most significant dissents in the history of that institution . . .riveting . . . Indeed, his book can serve as a guide, a way of determining what constitutes a really fine and compelling dissent.”
—Dahlia Lithwick, New York Times Book Review