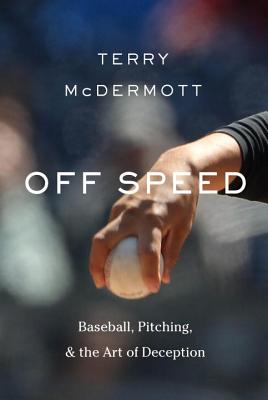 Baseball, Pitching, and the Art of Deception

Longlisted for the PEN/ESPN Award for Literary Sports Writing

In August 2012, Felix Hernandez of the Seattle Mariners pitched a perfect game against the Tampa Bay Rays in what Terry McDermott calls “one of the greatest exhibitions of off-speed pitches ever put on.” For McDermott, a lifelong fan and student of baseball, the extraordinary events of that afternoon inspired this incisive meditation on the art of pitching.

Within the framework of Hernandez’s historic achievement, Off Speed provides a vibrant narrative of the history and evolution of pitching, combining baseball's rich tradition of folklore with the wealth of new metrics from a growing legion of statisticians who are transforming the way we think about the game. Off Speed is also the personal story of a fan’s steadfast devotion, first kindled in McDermott by his father at the local diamond in small-town Iowa and now carried forward with the same passion by his own daughters.

Approaching his subject with the love every fan brings to the park and the expertise of a probing journalist, McDermott explores with irrepressible curiosity the science and the romance of baseball.

TERRY McDERMOTT is a former national reporter for the Los Angeles Times and the author of three previous books: The Hunt for KSM: Inside the Pursuit and Takedown of the Real 9/11 Mastermind, Khalid Sheikh Mohammed (co-authored with Josh Meyer); 101 Theory Drive: The Discovery of Memory; and Perfect Soldiers: The 9/11 Hijackers—Who They Were, Why They Did It. A native of Iowa, he now lives in southern California.

Praise For Off Speed: Baseball, Pitching, and the Art of Deception…

“A deeply felt portrayal of the men on the mound.” —Will Leitch, The Atlantic

“A nostalgic and witty tribute to the cunning and craft of baseball pitchers. . . .  Engaging. . . . Delightful. . . . A treat for statistics junkies [and] readers who appreciate the human dimension of the sport. . . . McDermott is a wonderful person with whom to share a baseball game.” —Tom Zelman, Star Tribune (Minneapolis)

“What lover of the game will not delight in McDermott’s field-of-dreams nostalgia for the baseball he played and watched growing up in his small Iowa hometown? No one passionate about America’s national pastime will leave these pages disappointed.”
—Booklist (starred review)

“A lovely memoir of the game as it is played from Iowa sandlots to the Kingdome, along with a fascinating and absorbing history of pitching. A terrific book for both beginners and longtime fans.”
—Kevin Baker, author of America the Ingenious

“Nine innings, nine pitches, one hell of a book. Off Speed is a must-read for any fan of the magic that can be found at the intersection of New School data and Old School romance.”
—Ian O’Connor, author of The Captain: The Journey of Derek Jeter

“Off Speed is baseball magic. As soon as Terry McDermott set down thirteen deft definitions of pitches, with which I happily began to quibble, then gave me Willie Stargell likening the attempt to hit Sandy Koufax to trying to drink coffee with a fork, I fell into a flow state that held to the last chapter.”
—David James Duncan, author of The Brothers K

“A fascinating history of pitching mixed with scientific facts, psychological insights, delightful digressions about small-town American life, and the heart-thumping play-by-play of Felix Hernandez’s march to perfection. I always knew that King Felix was great, but now I know why.”
—Zack Hample, author of The Baseball

“A paean to baseball from the perspective of an experienced fan. Off Speed is the rare book that goes deep inside the sport with an approach accessible to insiders and novices alike. Its crisp writing offers historic foundation while conveying, in full bloom, the depth of the author’s passion.”
—Jason Turbow, author of Dynastic, Bombastic, Fantastic
or support indie stores by buying on
Copyright © 2020 American Booksellers Association