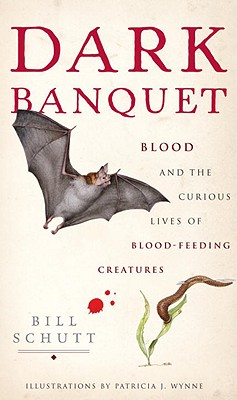 Blood and the Curious Lives of Blood-Feeding Creatures

For centuries, blood feeders have inhabited our nightmares and horror stories, as well as the shadowy realms of scientific knowledge. In Dark Banquet, zoologist Bill Schutt takes readers on an entertaining voyage into the world of some of nature’s strangest creatures—the sanguivores. Using a sharp eye and mordant wit, Schutt makes a remarkably persuasive case that vampire bats, leeches, ticks, bed bugs, and other vampires are as deserving of our curiosity as warmer and fuzzier species are—and that many of them are even ­worthy of conservation.
Schutt takes us from rural Trinidad to the jungles of Brazil to learn about some of the most reviled, misunderstood, and marvelously evolved animals on our planet: vampire bats. Only recently has fact begun to disentangle itself from fiction concerning these remarkable animals, and Schutt delves into the myths and misconceptions surrounding them.

Examining the substance that sustains nature’s vampires, Schutt reveals just how little we actually knew about blood until well into the twentieth century. We revisit George Washington on his deathbed to learn how ideas about blood and the supposedly therapeutic value of bloodletting, first devised by the ancient Egyptians and Greeks, survived into relatively modern times. Schutt also tracks the history of medicinal leech use. Once employed by the tens of millions to drain perceived excesses of blood, today the market for these ancient creatures is booming once again—but for very different reasons.

Among the other blood feeders we meet in these pages are bed bugs, or “ninja insects,” which are making a creepy resurgence in posh hotels and well-kept homes near you. In addition, Dark Banquet details our dangerous and sometimes deadly encounters with ticks, chiggers, and mites (the ­latter implicated in Colony Collapse Disorder—currently devastating honey bees worldwide). Then there are the truly weird—vampire finches. And if you thought piranha were scary, some people believe that the candiru (or willy fish) is the best reason to avoid swimming in the Amazon.

Enlightening, alarming, and appealing to our delight in the bizarre, Dark Banquet peers into a part of the natural world to which we are, through our blood, inextricably linked.


Praise For Dark Banquet: Blood and the Curious Lives of Blood-Feeding Creatures…

“A jaunty, instructive and charmingly graphic look at nature’s born phlebotomists – creatures from wildly different twigs of the phylogenetic tree that all happen to share a fondness for blood.”
—The New York Times

“[P]rofiles some of the animal kingdom's dedicated bloodsuckers, from vampire bats and the dreaded candiru catfish to the not-so-dreaded vampire finch….Schutt is an engaging writer.”
—Washington Post Book World

“With great scientific accuracy (backed up by extensive notes and a bibliography), text couched in layman’s terms, and a sense of breathless discovery, Schutt will make blood feeding just another choice on the culinary spectrum.”
—Booklist

“Dr. Schutt’s voyage through the world of blood-feeders is alive with humor and the sheer fun of scientific exploration. He may become the literary heir to Stephen Jay Gould–if you can imagine Gould writing after downing twelve cups of coffee sweetened with nitrous oxide.”
—Charles Pellegrino

"What starts out as a horror movie of a book morphs into an entrancing exploration of the living world. Bill Schutt turns whatever fear and disgust you may feel towards nature's vampires into a healthy respect for evolution's power to fill every conceivable niche. And once you're done, you'll be spoiling one dinner party after another retelling Schutt's tales of bats, leeches, and bed bugs."
—Carl Zimmer, author of Parasite Rex and Microcosm: E. coli and the New Science of Life

“Having donated some of myself to most kinds of bloodsuckers during my field research around the world, mercifully with the exception of vampire bats and candiru catfish, I was totally absorbed by this thoroughly charming and scientifically accurate account.”
—Edward O. Wilson

“The combination of Bill Schutt's marvelous writing and Patricia J. Wynne's elegant illustrations makes Dark Banquet--the definitive account of blood feeding in nature-- an unstoppable, exhilarating read. Schutt brings both wisdom and wit to his coverage of fascinating facts about the biology of various creatures and the historical interplay of humans as victims, beneficiaries, and scientists. The book has the perfect balance of enlightenment, humor, an irreverence that is so true to a dedicated field biologist with a keen sense of subjects ranging from Leonardo Da Vinci's fascination with leech locomotion to New York's bed bug problem. Dark Banquet is engrossing without being gross at all!”
—Michael Novacek, Provost and Curator, American Museum of Natural History