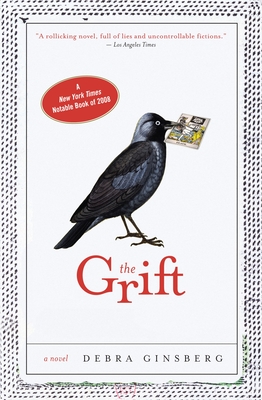 “Marina's drug-addicted mother used her to tell fortunes. Once she is free of her mother's controlling hand, Marina continues to make a living by telling people what they want or need to hear. But, gradually, the intertwined lives of her clients turn dark with lies and deceit as Marina begins to see things that her clients do not want to hear.”
— Jessilynn Krebs, McLean & Eakin Booksellers, Petoskey, MI
View the List

Marina Marks has been on the grift since she was a child, forced into the psychic business by a junkie mother who was always willing to use her daughter to scam an extra buck. But when Marina wakes up one day with the actual ability to see the future, she finds her freedom–and her life–in danger. After predicting a murder exactly as it happens, Marina becomes the sole suspect. Now she’s desperate to clear her name–and to discover the meaning behind her visions.

Praise For The Grift: A Novel…

“The Grift is a gift with no strings attached…a satisfyingly voyeuristic vision of a mysterious stranger’s supernaturally charged fortunes."
—The New York Times

“Debra Ginsberg's compelling second novel…isn't so much a mystery as a story about a woman forced to take a hard look at herself and find the courage to change.”
—The Boston Globe

"The Grift mixes mystery and romance...[and] is embellished with a host of lively misfits, a serial philanderer, a spoiled rich woman hoping to get pregnant and a gay man in unrequited love.”
—The Chicago Sun-Times

“Usually when Marina Marks, who’s made a career of faking psychic powers, looks into the future, all she can see is cash. But then she starts receiving eerily accurate visions in this rollicking novel of twists and turns. We predict you'll love it!”
—Redbook

“A rollicking novel, full of lies and uncontrollable fictions.”
—The Los Angeles Times

“Memoirist and novelist Ginsberg mixes supernatural and film noir elements in this mystery about a woman whose living as a psychic falls apart when her psychic powers become too real .... Marina is a richly drawn, deeply involving heroine ....”
—Kirkus

“Ginsberg's second novel is an entertaining whodunit and an invigorating tale about a damaged young storefront psychic who learns how to live truthfully….Ginsberg thoroughly exploits her clever premise, and Marina's handling of her troubles–romantic, professional, mystical–ring true through to the redemptive end.”
—Publisher’s Weekly

“Ginsberg…has created an interesting cast of characters to explore a world that is embraced by some and viewed by many with deep skepticism. The story flows along, and readers looking for a different twist on the psychological novel will enjoy the trip.”
—Library Journal

“The Grift is a gift—a fresh voice and story, with a winning heroine. Another triumph for Debra Ginsberg,
who clearly has many gifts of her own.”
—Laura Lippman, author of What the Dead Know and Another Thing to Fall

“Debra Ginsberg has done it again in this compulsively readable, suspenseful, and very this-worldly tale
of a psychic and her desperate clientele.”
—Janet Fitch, author of Paint it Black and White Oleander

“The pleasure comes in waves . . . If you’re a book person, give yourself a treat and take a look at Blind Submission.”
—Carolyn See, Washington Post

DEBRA GINSBERG is the author of the novel Blind Submission, as well as three memoirs: Waiting, Raising Blaze, and About My Sisters.
Loading...
or
Not Currently Available for Direct Purchase