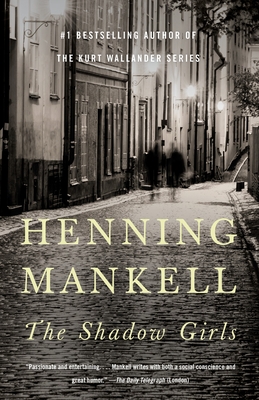 From the dean of Scandinavian noirand the internationally bestselling and universally acclaimed Kurt Wallander series, comes this moving and profound literary novel about three refugee women and the poet they befriend.

Jesper Humlin is a mildly famous author and poet with lackluster book sales. Not even his editor will support his artistic vision, suggesting instead that he start writing crime novels in the place of poetry. In his travels, Humlin encounters three women who will change his worldview. All three have fled their home countries and settled in Sweden: Leyla from Iran, Tanya from Russia, and Tea-Bag from Nigeria. The women look to Humlin for guidance in telling their stories, learning how to shape the tales of their journeys and sacrifices. Both social comedy and social tragedy ensue from these efforts, but in the end Humlin, Leyla, Tanya and Tea-Bag all find that they have helped change one another.

The Shadow Girls is an absorbing tale of how a diverse society changes—and is changed by—its citizens, whoever they are

Praise For The Shadow Girls…

“At once darkly absurd, funny, passionate, wrenching and deeply socially aware. . . . [And] a heartfelt reminder of the many people whose struggles are never known.”
—The Plain Dealer

“Passionate and entertaining. . . . Mankell writes with both a social conscience and great humor.”
—The Daily Telegraph (London)

“A serious novel with a lot of heart.”
—Bookreporter

“Mankell is giving a voice to those who do not possess one.”
—The Independent (London)

“Henning Mankell works . . . astounding magic. . . . He brings us the distinctive but overlapping voices of three perceptive young women who, once their harrowing, poetic floods of pain are released, can never again be ignored.”
—Washington Independent Review of Books

Henning Mankell is the internatinally acclaimed, bestselling author of the Kurt Wallander novels.  Mankell's novels have been translated into forty-five languages and have sold more than forty million copies worldwide. He was the first winner of the Ripper Award and also received the Glass Key and the Crime Writers’ Association Golden Dagger, among other awards. His Kurt Wallander mysteries have been adapted into a PBS television series starring Kenneth Branagh. During his life, Mankell divided his time between Sweden and Mozambique, where he was artistic director of the Teatro Avenida in Maputo. He died in 2015.