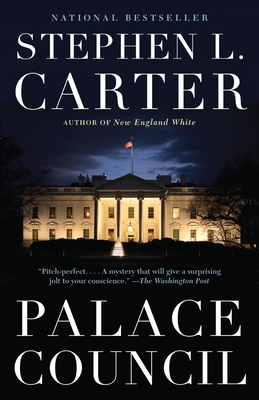 A gripping, nationally bestselling political thriller set against the backdrop of Watergate, Vietnam, and the Nixon White House.

Philmont Castle is a man who has it all: wealth, respect, and connections. He's the last person you'd expect to fall prey to a murderer, but then his body is found on the grounds of a Harlem mansion by the young writer Eddie Wesley, who along with the woman he loves, Aurelia Treene, is pulled into a twenty-year search for the truth. The disappearance of Eddie's sister June makes their investigation even more troubling. As Eddie and Aurelia uncover layer upon layer of intrigue, their odyssey takes them from the wealthy drawing rooms of New York through the shady corners of radical politics all the way to the Oval Office and President Nixon himself.

Stephen L. Carter is the William Nelson Cromwell Professor of Law at Yale, where he has taught for almost thirty years. He is the author of three bestselling novels and seven acclaimed works of nonfiction. He and his family live near New Haven, Connecticut.

"Pitch-perfect. . . . A mystery that will give a surprising jolt to your conscience."—The Washington Post“A delicious, page-turning trifecta. . . . A family saga, a political tour of several tumultuous American decades and a murder mystery. . . . Rich and deeply satisfying.”—The Plain Dealer “Page-turning summer reading.... Palace Council gives grim song to the secrets that men keep.”—Dallas Morning News“Masterful.... Provides lots more wisdom than most thrillers attempt.”—San Diego Union-Tribune“Mr. Carter’s storytelling is underpinned by a masterly evocation of the world of wealthy and accomplished blacks in twentieth-century America.” —The Wall Street Journal“A well-lit showcase for Carter’s considerable strengths.” —The Seattle Times“The twists, turns and double-crosses take place in a number of settings, including Harlem, Washington and parts of Africa and Southeast Asia....Palace Council contains tantalizing hints of conspiracies to come.” —Los Angeles Times“An engrossingly complex political thriller.”—Daily News“Stephen Carter can really write. I loved every page of Palace Council and am eager for more.” —Robert B. Parker
or
Not Currently Available for Direct Purchase
Copyright © 2020 American Booksellers Association