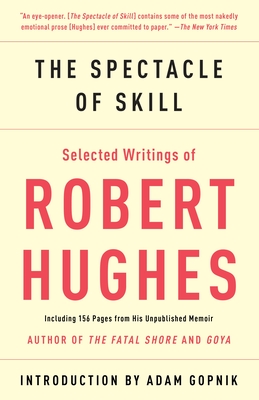 The Spectacle of Skill

Over the course of his distinguished career, Robert Hughes wrote with brutal honesty about art, architecture, culture, religion—and himself. The Spectacle of Skill brings together some of his most unforgettable pieces, culled from nine of his most widely read and important books, alongside never-before-published pages from his unfinished second volume of memoirs. Showcasing Hughes’s enormous range, this indispensable anthology offers a uniquely cohesive view of both the critic and the man.

Praise For The Spectacle of Skill: Selected Writings of Robert Hughes…

“An eye-opener. [The Spectacle of Skill] contains some of the most nakedly emotional prose [Hughes] ever committed to paper.” —The New York Times

“Hughes wrote many kinds of things in a career that spanned four decades . . . but his primary goal was always the same: to entertain, especially while he was educating. The Spectacle of Skill will serve as a generous reminder to all those familiar with Hughes’s prose of just how dazzlingly he succeeded at that goal, and it will introduce newcomers to one of the great critical voices of the late 20th century.” —The Christian Science Monitor

“[The Spectacle of Skill] echo[es] with an erudite authority that would seem impossible to obtain in our day, and a bombast that would be unbearably rude. The combination, conveyed in a clear and entertaining prose, will feel nostalgic even to those who come to know [Hughes] only by this book.” —San Francisco Chronicle

“Art writing is rarely readable and hardly ever done well. Few did it better than Robert Hughes.” —Chicago Tribune

“For anyone who wishes emphatically to know what is what in the here and now.” —The Wall Street Journal

Robert Hughes was born in Australia in 1938. In 1970 he moved to the United States to become chief art critic for Time, a position he held until 2001. His books include The Shock of the New, The Fatal Shore, Nothing if Not Critical, The Culture of Complaint, Barcelona, Goya, Things I Didn’t Know, and Rome. He is a New York Public Library Literary Lion, and was the recipient of a number of literary awards and prizes, including two Frank Jewett-Mather Awards. He is widely held as the most respected art critic of our time.
or support indie stores by buying on