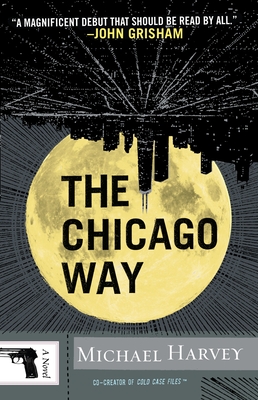 Private detective Michael Kelly is hired by his former partner to solve an eight-year old rape and battery case long gone cold. But when the partner turns up dead, Kelly enlists a team of his savviest colleagues to connect the dots between the recent murder and the cold case it revived: a television reporter whose relationship with Kelly is not strictly professional; his best friend from childhood, a forensic DNA expert; and an old ally from the DA's office. To close the case, Kelly will have to face the mob, a serial killer, his own double-crossing friends, and the mean streets of the city he loves.

Michael Harvey is the creator, writer, and executive producer of the television series Cold Case Files, as well as an Academy Award-nominee for his documentary Eyewitness, and is a former investigative reporter for CBS. He earned a law degree at Duke and a masters in journalism from Northwestern. He alsoowns a bar in Chicago.

“A magnificent debut that should be read by all.” —John Grisham“An intricate, fast-paced crime thriller.” —The Chicago Sun-Times“ A smart, stylish debut.” —The Boston Globe“This book harkens the arrival of a major new voice.” —Michael Connelly“Gritty and witty, The Chicago Way is done the classic Raymond Chandler Way.” —Kathy Reichs
or support indie stores by buying on
Copyright © 2020 American Booksellers Association