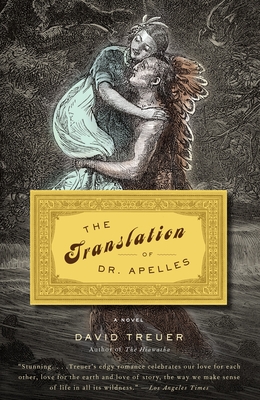 Dr. Apelles, a translator of ancient texts, has made an unsettling discovery: a manuscript that has languished for years, written in a language that only he speaks. Moving back and forth between the scholar and his text, from a lone man in a labyrinthine archive to a pair of beautiful young Indian lovers in an unspoiled and snowy woodland, David Treuer weaves together two love stories. Enthralling and suspenseful, The Translation of Dr. Apelles dares to redefine the Native American novel.

David Treuer is an Ojibwe Indian from Leech Lake Reservation in northern Minnesota. He is the recipient of a Fulbright Fellowship to Canada, a Pushcart Prize, the 1996 Minnesota Book Award and was a finalist for the Penn West prize in 1999. The Translation of Dr Apelles is his third novel. He divides his time between his home on the Leech Lake Reservation and Minneapolis.

Praise For The Translation of Dr. Apelles (Vintage Contemporaries)…

"Stunning. . . . Treuer's edgy romance celebrates our love for each other, love for the earth and love of story, the way we make sense of life in all its wildness." —Los Angeles Times

"Deeply crafty, shape-shifting. . . . [Treuer] seems to want to do for Native American culture and literature what James Joyce did for the Irish: haul it into the mainstream of Western culture through sheer nerve and verve." —The Washington Post

"The Translation of Dr Apelles . . . provides new layers of information and meaning with every pass. This Escher-esque craftsmanship dazzles." —The Seattle Times

“David Treuer is mounting a challenge to the whole idea of Indian identity as depicted by both Native and white writers."
—The New York Times