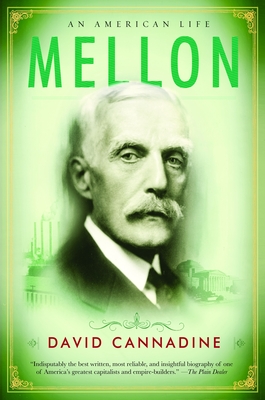 Andrew Mellon, one of America’s greatest financiers, built a legendary personal fortune from banking to oil to aluminum manufacture, tracking America’s course to global economic supremacy. As treasury secretary under Presidents Harding, Coolidge, and finally Hoover, Mellon made the federal government run like a business–prefiguring the public official as CEO. He would be hailed as the architect of the Roaring Twenties, but, staying too long, would be blamed for the Great Depression, eventually to find himself a broken idol. Collecting art was his only nonprofessional gratification and his great gift to the American people, The National Gallery of Art, remains his most tangible legacy.

David Cannadine was born in Birmingham in 1950 and educated at the Cambridge, Oxford, and Princeton. He is the editor and author of many acclaimed books, including The Decline and Fall of the British Aristocracy, which won the Lionel Trilling Prize and the Governors' Award; Aspects of Aristocracy; G. M. Trevelyan; The Pleasures of the Past; History in Our Time; and Class in Britain. He has taught at Cambridge and Columbia and is now the Queen Elizabeth the Queen Mother Professor of British History at the Institute of Historical Research, University of London.

“Absorbing. . . . Cannadine writes like a storyteller, and the book often reads as compulsively as one of those immense fictional sagas that weigh down the bestseller lists. Sin and redemption are always close to the center of those family tales, and so they are in Mellon.”
—Russell Baker, The New York Review of Books

“A fascinating biography. . . . A sprawling work for a sprawling life.”
—Roger Lowenstein, The New York Times

“A commanding biography, unsparing in revelation, lively in its writing, rigorous in its scholarship, astute in its judgments, and altogether a major contribution to American history.”
—Harold Evans, author of The American Century and They Made America
or
Not Currently Available for Direct Purchase
Copyright © 2020 American Booksellers Association