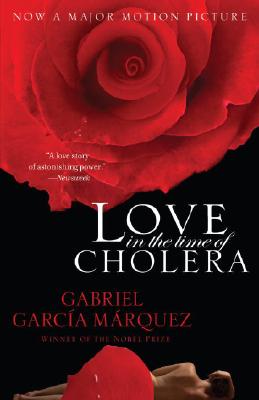 Love in the Time of Cholera (Movie Tie-in Edition)

In their youth, Florentino Ariza and Fermina Daza fall passionately in love. When Fermina eventually chooses to marry a wealthy, well-born doctor, Florentino is devastated, but he is a romantic. As he rises in his business career he whiles away the years in 622 affairs--yet he reserves his heart for Fermina. Her husband dies at last, and Florentino purposefully attends the funeral. Fifty years, nine months, and four days after he first declared his love for Fermina, he will do so again.

“This shining and heartbreaking novel may be one of the greatest love stories ever told.” --The New York Times Book Review

“A sumptuous book…[with] major themes of love, death, the torments of memory, the inexorability of old age.” --The Washington Post Book World

Gabriel Garcia Marquez was born in Aracataca, Colombia, in 1927. He attended the University of Bogota and went on to become a reporter for the Colombian newspaper "El Espectador." He later served as a foreign correspondent in Rome, Paris, Barcelona, Caracas, and New York. Winner of the Nobel Prize for Literature in 1982, he is the author of several novels and collections, including No One Writes to the Colonel and Other Stories," "The Autumn of the Patriarch, Innocent Erendira and Other Stories, Chronicle of a Death Foretold, The General in His Labyrinth, Strange Pilgrims, Love and Other Demons, and most recently, Memories of My Melancholy Whores, as well as the autobiography Living to Tell the Tale.
Loading...
or
Not Currently Available for Direct Purchase