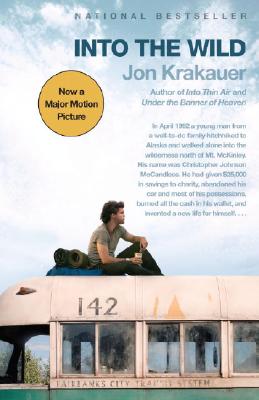 Into the Wild (Movie Tie-in Edition)

In April 1992 a young man from a well-to-do family hitchhiked to Alaska and walked alone into the wilderness north of Mt. McKinley. His name was Christopher Johnson McCandless. He had given $25,000 in savings to charity, abandoned his car and most of his possessions, burned all the cash in his wallet, and invented a new life for himself. Four months later, his decomposed body was found by a moose hunter....


Praise For Into the Wild (Movie Tie-in Edition)…

“A narrative of arresting force. Anyone who ever fancied wandering off to face nature on its own harsh terms should give a look. It’s gripping stuff.” —The Washington Post

“Haunting . . . few outdoors writers of the day can match Krakauer for bringing outside adventure to life on the page.” —Portland Oregonian

“It may be nonfiction but Into the Wild is a mystery of the highest order.” —Entertainment Weekly

“Sensational. . . . [Krakauer] is such a good reporter that we come as close as we probably ever can to another person’s heart and soul.” —Men’s Journal