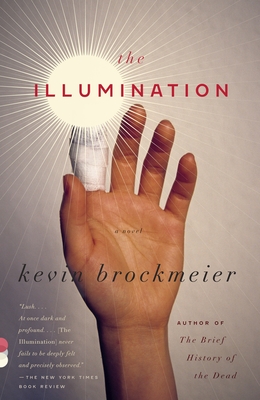 “Brockmeier's latest novel weaves together disparate voices in a stunning meditation on pain and beauty. Like the best speculative fiction, it wields the paranormal to show us a very present truth. The Illumination is a reminder that, no matter how dramatically the world changes around us, people are and always will be people - and that there is a brightness in that, regardless of our failings.”
— Jenn Northington, WORD, Brooklyn, NY
View the List

Named a Best Book of the Year by NPR, The Seattle Times, The Kansas City Star, and Philadelphia City Paper

What if our pain was the most beautiful thing about us?

At 8:17 on a Friday night, the Illumination begins. Every wound begins to shine, every bruise to glow and shimmer. And in the aftermath of a fatal car accident, a journal of love notes, written by a husband to his wife, passes into the keeping of Carol Ann Page, and from there through the hands of five other people—a photojournalist, a schoolchild, a missionary, a writer, and a street vendor. As their stories unfold, we come to understand how intricately and brilliantly they are connected, in all their human injury and experience. With the artistry and imagination that have become his trademark, Kevin Brockmeier reveals a world that only he could imagine, casting his gaze on the wounds we bear and the light that radiates from us all.

Praise For The Illumination (Vintage Contemporaries)…

“Lush. . . .  At once dark and profound. . . . [The Illumination] never fails to be deeply felt and precisely observed.” —The New York Times Book Review

“A beautiful novel. . . . Brockmeier is a dazzling stylist.” —The Washington Post Book World

“Stunningly original . . . this gorgeously written book will still stay with [readers] long after the last page is turned.” —The Oregonian

“Show[s] us the astonishment of life as it is really being lived.” —The Boston Globe

“Moving. . . . Skillfully explores the relationship between love and memory.” —The New Yorker

“The depth of [Brockmeier’s] scrutiny makes his fiction glow.” —The Plain Dealer

“Brockmeier’s characters are wonderful, and his images are dazzling.” —Detroit Free Press

“The Illumination imagines a real universe of pain and pleasure, connection and disconnection, and quest for meaning that defines human experience delightfully anew.” —The Miami Herald

“Brockmeier’s consistently arresting observations have the throb of lived—rather than merely imagined—experience. . . . In The Illumination it isn’t our agonies and discomforts that define us, but the selves we build in response to them.” —Salon

“Brockmeier’s work has always been characterized by his crystalline and surprising descriptions. . . . Brilliant. . . . Thorough and honest.” —Southern Literary Review

“Lyrical. . . . Both the quotidian warmth of the notebook and the increasingly incidental shimmer of physical suffering draw the characters—and us—into the complex and vivid consideration of some of the fundamental questions that come with being human.” —The Times Literary Supplement (London)

“[A] sunlit novel.” —Time Out Chicago

“Fresh and ingenious. . . . Brockmeier has one of those imaginations that churns out picture-perfect imagery.” —Elle

Kevin Brockmeier is the author of the novels The View from the Seventh Layer, The Brief History of the Dead, The Truth About Celia, Things That Fall from the Sky, and two children's novels. His stories have appeared in The New Yorker, Tin House, McSweeney's, The Oxford American, The Best American Short Stories, O. Henry Prize Stories and Granta's Best of Young American Novelists, among other publications. He has taught at the Iowa Writer's Workshop and lives in Little Rock, Arkansas.
Loading...
or
Not Currently Available for Direct Purchase