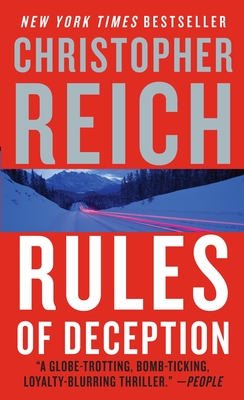 Dr. Jonathan Ransom, a surgeon for Doctors Without Borders, is climbing in the Swiss Alps with his wife, Emma, when she falls into a hidden crevasse and dies. Twenty-four hours later, Jonathan receives an envelope addressed to his wife containing two baggage-claim tickets. Puzzled, he journeys to a railway station only to find himself inexplicably attacked by the Swiss police. Suddenly forced on the run, Jonathan's only chance at survival lies in uncovering the devastating truth behind his wife's secret life.

Follow the Rules:
Don't miss the other thrillers in the series—Rules of Vengeance (in paperback) and Rules of Betrayal (in hardcover July 2010).

“Turbo-charged.... Entertainingly serpentine.”—The New York Times“A globe-trotting, bomb-ticking, loyalty-blurring thriller.” —People"Rules of Deception packs a wallop. Christopher Reich is at the top of his game."—David Baldacci“First-rate…. Sophisticated, suspenseful, even surprising.” —Washington Post"Never has a plane ride gone by so quickly! Rules of Deception was such a thrilling and compelling read that I spent the whole flight anxiously turning the pages, breathless to find out how it ended. Full of stunning twists and turns, packed with suspense, this is everything a great thriller should be."—Tess Gerritsen“Rules of Deception is an ingenious thriller set credibly in the shadowy world of international espionage. This one has it all: well-drawn characters, wonderful writing, exotic settings, and a high-tech terrorist plot that will keep you breathlessly racing along right through its electrifying climax.”—Nelson DeMille"There's a reason why Christopher Reich is a superstar writer. You'll find it on page one of this book. And page two. And page three . . . and all the way to the vivid end of this great new thriller."—Lee Child“Rules of Deception is pure suspense—an ingenious spy thriller for the new millennium.”—Linda Fairstein“Rules of Deception delivers pure suspense, intrigue, and adventure from its first page to its last. Christopher Reich is the master of the espionage thriller for the twenty-first century.”—Clive Cussler"Fast-paced and intriguing, Rules of Deception is a great international thriller full of twists and turns that kept me guessing to the very end. A very enjoyable read."—Kate Mosse"Once again, Chris Reich is firing on all cylinders. Rules of Deception is a supple, elegant thriller with a beguiling sophistication. Reich catches the reader on page one and utterly commands you to finish through a plot that carries triumphantly from one thrilling climax to another. He certainly knows how to manipulate the reader in exciting ways, and he's an expert (as his award-winning The Patriots Club proved) in creating a riveting imagined world so real you wonder if it was actually imagined."—Steve Berry“Rules of Deception is an intense, impossible-to-put down spy novel—like Robert Ludlum at his very best."—Vince Flynn

Christopher Reich is the New York Times bestselling author of Numbered Account. He lives in Encinitas, California.www.christopherreich.com
Loading...
or
Not Currently Available for Direct Purchase